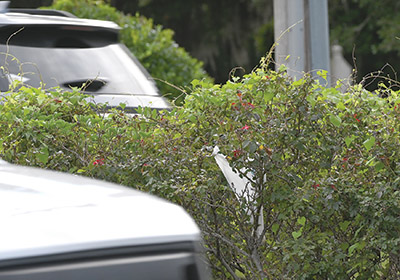 Vines grow up over roses that have also trapped litter in the median.

Landscaping in the raised median on Highway 17 through the Pawleys Island business district will be restored after seasons of neglect. Georgetown County has set a timetable for the work.

“ASAP,” said Beth Goodale, director of Parks and Recreation, who is overseeing the effort.

The work is expected to cost $30,000 and will be done at night by Waccamaw Landscaping. The firm planted the original landscaping in 2015 when the state Department of Transportation installed the medians to replace a two-way left-turn lane on 1.9 miles of highway. DOT funded the maintenance for the first year. The county hired a maintenance contractor in 2017, but the company only showed up a few times.

Weeds grew up over the next two years along with complaints from the public. The county Economic Development director hired Waccamaw Landscaping to put the median back in order. The first cleanup was done before Easter, closing two lanes of the highway and generating new complaints about the traffic snarl. Waccamaw said it would only do further work if it could be done at night, which would be more expensive.

The county found another contractor, CRM, which started work during the daytime without lane closures in the fall of 2019.

“Unfortunately, this project fell through the cracks with the transition to a new Economic Development director,” Angela Christian, the county administrator, said. That was in the fall of 2021.

Now that the need has been pointed out, “they are starting immediately,” she said.

Ken Dewell, who is president of the Litchfield Beautification Foundation, was among those who were concerned about the state of the raised medians. The foundation maintains the medians to the north. The Pawleys Island Highway  Beautification Committee maintains the median landscaping farther south. The raised medians are known as the orphan medians.

“When I looked at those orphans, I said I’ve got to do something,” Dewell said.

He and Bill McElroy, a past president of the foundation, got cost estimates from Waccamaw Landscaping to restore the raised median plantings and presented them to the county.

Christian put Goodale at Parks and Recreation in charge of the project.

“The county is going to fund at least the remediation effort,” Dewell said.

It isn’t a Litchfield Beautification Foundation project, he added, but he hopes that maintenance will become a similar public-private partnership once the median gets in “acceptable condition.”

The Pawleys Island-Litchfield Business Association bought flags to display in the median on federal holidays, something the two landscaping groups also do. But they kept them furled for last week’s Independence Day.

“We didn’t put out flags for the Fourth because the media looked so bad. We felt that was going to be disrespectful to our flag,” said Kim Fox, the association’s executive director.

The group had considered funding a cleanup, but there wasn’t time, she said.

“I’m glad to know they’re going to be addressing that,” Fox said. “All medians are important, but those in particular because it’s our business district. It’s not a good look.”

County Council Member Steve Goggans, who also raised the issue of the orphan medians with Christian, said that there needs to be funding for ongoing maintenance.

The former administrator, Sel Hemingway, had proposed funding all the groups that maintain median landscaping from Garden City to Pawleys Island get a base amount from accommodations tax revenue. Those that want to do more, could raise additional funds.

The money that comes to the county from the state accommodations tax is used for tourism marketing and for grants for tourism-related activities that are awarded by the council based on recommendations from an advisory committee.

Members of the committee have said the landscaping projects divert funds that could be used for marketing. Goggans thinks the landscape maintenance is an appropriate use of the tax on short-term rentals.

“I can think of lots of ways that promotion can occur in addition to the advertising and social media,” he said.

With the county at the start of a new fiscal year, Goggans wants to establish firm funding for maintaining the landscaped medians, particularly the raised median.

“There’s some community interest in adopting it,” he said.