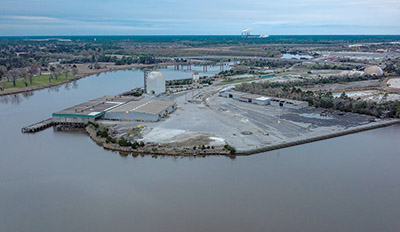 The port saw its last cargo shipment in 2017.

Georgetown County is on track to acquire the port of Georgetown from the state in a deal that officials say could transform the city’s economy.

“The port’s been sitting there for years undeveloped,” state Rep. Lee Hewitt said. “It’s dragging down the city.”

Hewitt has worked for two years on a deal to get the S.C. Ports Authority to turn over 250 acres on the Sampit River to the county. In exchange for the property, the ports authority will keep $3.25 million that the legislature budgeted for a port dredging project in partnership with the county and the Army Corps of Engineers. That project was scrapped because the cost was more than twice the initial estimates.

The deal is outlined in a budget proviso that Hewitt introduced. It received final reading from the S.C. House this week.

The budget needs approval by the Senate and the governor. Hewitt said Sen. Stephen Goldfinch and Sen. Ronnie Sabb have told him they support the measure.

“I would hope everybody realizes there’s an opportunity there,” Hewitt said.

County Council Member Bob Anderson said he started talking with port and county officials about the project about six years ago when he realized that the port dredging wasn’t going to take place. He was out of office at the time.

“Lee’s been outstanding on making this go forward,” Anderson said.

Georgetown became a port of entry in 1732.  In 2000, the port handled 1.8 million tons of cargo. That had declined to 7,500 tons by 2017 and the port hasn’t been used since, according to figures compiled by Georgetown County.

“The city of Georgetown is not healthy when it’s losing segments of its population,” Hewitt said. “Look at Beaufort, look at Charleston, look at Myrtle Beach. They’ve got jobs. They’ve got energy.”

Hewitt said he believes a waterfront development could bring that kind of energy to Georgetown.

The S.C. Ports Authority property is actually just outside the city limits.  There are 45.2 acres overlooking the harbor between the Sampit River bridge and Liberty Steel’s mill. Another 210 acres are upstream of the bridge and diked for a spoils site.

The property on the harbor was included in a 2016 redevelopment study by the Urban Land Institute prompted by the shutdown of the steel mill, then owned by ArcelorMittal. It envisioned a mix of commercial, residential and civic uses along the waterfront. The ports authority property was envisioned as part of a “University Village” that would build on the county’s ties with USC, Clemson and Coastal Carolina. But it also included a park and marine services at the site of the existing docks.

“It’s just the best report. Everybody ought to have it memorized,” Mayor Carol Jayroe said. “That’s what I like about it. Make it a working waterfront.”

Hewitt expects the city and the county will work together on a master plan for the property. So far, there haven’t been any discussions, County Council Chairman Louis Morant said.

“The county hasn’t discussed any development,” he said.

Morant noted that any plan for the port property will hinge on the fate of the steel mill. Its property, 55.3 acres,  was rezoned in 2017 from “heavy industrial” to a “redevelopment district.” The mill was grandfathered, but the city said this year it was in violation of the current zoning and needed to cease its manufacturing operation.

Liberty Steel has appealed the decision to the city’s Board of Zoning Appeals, which will hold a hearing next month.

If the deal is approved as part of the state budget, the ports authority will have until June 30, 2023 to transfer the title. That will give the county time to perform due diligence, Hewitt said.

Like Jayroe, Hewitt would like to see a working waterfront created. “I’m not talking about condos and residential development,” he said. “It’s not just restaurant jobs.”

The county has $6 million from a capital projects sales tax that was earmarked for the port dredging. It has used surplus sales tax revenue to fund a study of the inner harbor and look for solutions to the shoaling.

“We’ve got a lot of work ahead to get the inner harbor dredged,” Anderson said.

He hopes federal or state funds can be found for that and the county’s money can be used for the redevelopment of the port property. “It’s going to take a lot of work,” Anderson said.