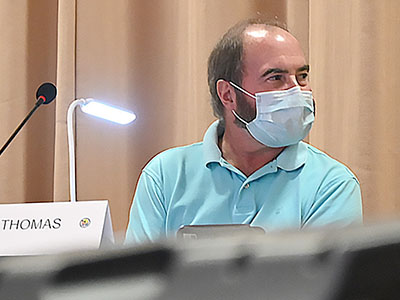 Council Chairman John Thomas says an ordinance will be hard to enforce.

Georgetown County Council this week joined communities around the state in requiring face masks in an effort to slow the spread of COVID-19. The ordinance takes effect at midnight tonight and will remain in effect for 60 days.

“There are lot of people asking us to do something,” Council Chairman John Thomas said, before Thursday’s emergency meeting. He initially had doubts about how the ordinance can be enforced. “You cannot regulate stupid. People are stupid out there,” he said.

The County Council vote was 6-1 with Raymond Newton, who represents District 5, opposed. He questioned the ability to enforce the ordinance and said businesses would end up policing it.

The ordinance requires a mask for anyone over the age of 10 who enters a “foodservice establishment, grocery store, retail store or pharmacy.” There is an exemption for people “actively drinking or eating” in a restaurant. People who cannot cover their face due to age or an underlying health condition are also exempt from the ordinance.

Also, employees must wear a mask “while have face-to-face interaction with the public.”

Businesses covered by the ordinance are required to post a copy by the front door. Wesley Bryant, the county attorney, said that will allow businesses to turn people away if they don’t comply.

Sheriff Carter Weaver “is on board,” Bryant said, but will help educate and warn the public. “We certainly don’t want to turn everyone in Georgetown County into a criminal because they don’t have a face mask on.”

The ordinance carries a $25 fine for each violation.

Thomas cited the support of Tidelands Health for the ordinance and the recommendation of the Centers for Disease Control and Prevention that people wear face coverings.

Confirmed cases in Georgetown County grew from 76  to 458 in the same period.

Within the last week, the county closed the central magistrate’s office and traffic court because an employee tested positive for COVID-19. The school district closed Georgetown Middle School after three employees tested positive.

Parades and fireworks displays have been cancelled for the Fourth of July.

Dr. Gerald Harmon, vice president of medical affairs for Tidelands Health, suggested that people celebrate the Fourth of July at home this year. He said this weekend will be “pivotal” in efforts to slow the spread of the virus.

The number of COVID-19 patients at Waccamaw Community and Georgetown Memorial hospitals increased from three to 40 in the last two weeks.

“Even if you don’t feel ill, it’s vital you take precautions to prevent the spread of COVID-19 because you could be infected and transmit the virus to others without realizing it,” Harmon said. “If we all do our part, we can get this situation under control.”

Gary Weinreich, a member of Preserve Murrells Inlet who has lobbied the county for months to control crowds along the Marshwalk, was pleased that the county took up the issue. He said people need to follow the guidance of medical and infectious disease experts, not all the other voices out there.

“If we don’t make the right decisions now, we’re going to get another shutdown,” Weinreich said. “People are going to stop coming.”

He would like to see council expand the ordinance to include outdoor areas like the Marshwalk where it’s not possible to social distance.

“We’re not seeing the recommended behaviors by residents or visitors,” Weinreich said. “The results that we’re seeing are very disturbing. We don’t have many tools in the tool box that I see that are believed to be effective right now while we’re waiting for a vaccine, other than social distancing and wearing a mask.”

Thomas said he proposed adding restaurants to the ordinance after talking with Charlie Campbell, owner of the Dead Dog Saloon and The Claw House. Thomas was told that restaurant staff is getting abuse from customers about masks, and they’re afraid to come to work because they don’t want to get sick from customers who are not wearing masks.

Due to the spike in cases, Dwight McInvaill, director of the county’s library system, said he will ask the library board on July 16 to delay the reopening of meeting rooms to the public.

“It would be so extremely difficult for me and my staff to monitor public usage,” McInvaill said. “We know how strongly some people feel, one way or the other, and it would just be putting people in potentially a confrontational environment.”

Even though the board instituted a mask requirement when branches partially reopened on June 1, McInvaill said he fears some people would not wear them during meetings.

He’s also concerned about the amount of time a room would have to be quarantined after a meeting if the people in attendance weren’t wearing masks.

McInvaill said the library systems in every coastal county in the state have mask requirements. He has only heard of one complaint locally.

“Most people are very glad that we have these face mask measures in place,” he added. “We’re really trying to do everything we can, and we appreciate the general cooperation from the public. It has been wonderful in this process. For us to get this COVID-19 contained, that’s what it takes.”

Update: This story was updated from the print version following the County Council vote.