Cracks in paving add to delay on parkway – Coastal Observer

Cracks in paving add to delay on parkway 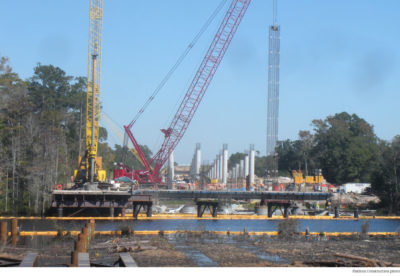 The repairs won’t involve the bridge pilings, just the paved surface on one space, according to officials.

Faulty concrete on a bridge over the Intracoastal Waterway has delayed the opening of the newest phase of the Carolina Bays Parkway at least until the fall, according to the state Department of Transportation. The project has already been delayed two years.

Lawmakers say they have tried for months to get answers from the agency about the project. “They’ve been very tight-lipped about it,” Mark Hoeweler, executive director of the Grand Strand Area Transportation Study, said.

The GSATS policy committee, made up of state and local officials, hoped to get information at a meeting last week. None seemed to be forthcoming until Tony Cox, who represents the 7th Congressional District on the DOT commission, said the paving on one of two spans across the waterway will have to be removed and replaced.

“Just the part across the waterway,” Cox said.

He told the committee, quietly, that a new contractor will complete the project, but that the firm has not been announced. There is no completion date.

It is only the pavement, not the structure, Stacey Johnson, a DOT project manager, said.

The project is a 7.5-mile extension of the parkway, also known as S.C. 31, from Highway 544 to Highway 707 in Horry County. The route has become the bypass to Bypass 17, Hoeweler said.

Pawleys Island Mayor Jimmy Braswell said he hopes the bridge repair can be completed before the peak of the hurricane season in September. It will help move traffic off the beach if there is an evacuation, he said.

Johnson said that is unlikely. The concrete on one of the 3,600-foot-long spans included a retardant. It didn’t dry properly and cracks resulted.

The old concrete must be removed from the steel reinforcing without damaging the metal. It’s labor-intensive, Johnson said.

“It’s been behind schedule since the beginning,” state Rep. Lee Hewitt said. The new section of Carolina Bays Parkway was last scheduled to open in April. “We have a problem with the contractor,” Hewitt said he was told by DOT. “They say, ‘We’ll get back to you.’ They never get back.”

Earlier this year, Hoeweler asked DOT officials about a ribbon-cutting. “They looked at me and laughed,” he said.

Hoeweler was told the new contractor will complete the project while Flatiron and DOT argue over the blame. Flatiron is a subsidiary of Hochtief, an international construction firm based in Germany.

“We don’t know when it’s going to be done and who’s going to end up paying for it,” Hewitt said.

A DOT spokesman said the agency plans to issue a statement on the situation soon.