Custodians move from behind the scenes to front lines – Coastal Observer

Custodians move from behind the scenes to front lines 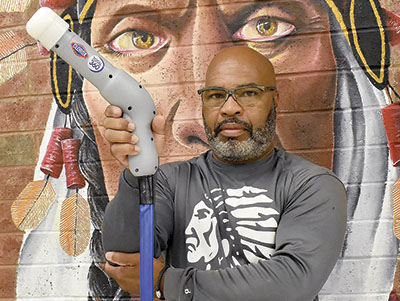 Lavern Staggers has been a custodian since 1981.

Lavern Staggers gets up before dawn and heads to the front lines. He has worked as a school custodian for almost 40 years. The job of keeping the schools clean is now about keeping them safe.

At the start of the coronavirus outbreak in late February, custodians across the district got a shipment of Clorox Total 360 cleaners. The system uses an electrostatic spray to help the disinfectant bind to surfaces.

While the pandemic brought change, the way the custodians clean isn’t too different. In fact, maybe the biggest change is how people are becoming aware of a custodian’s duties with school set to reopen Sept. 8.

School building managers are the ones who handle the Clorox Total 360 system. Staggers, the building manager at Waccamaw High, disinfected the front office on Wednesday, starting around 5:30 a.m.

It takes two hours to spray the main two halls of the high school.

Cleaning schedules at the four Waccamaw schools changed when the governor ordered schools to close in March and the work week was reduced. The high school is working four, four-hour days.

“Once you get started, time goes by so fast,” Staggers said. “Normally, you can do the majority of the work in a day, but now since it’s cut down, we have to adjust to that.”

“It helps and then it doesn’t,” Johnny Wilson, building manager for Waccamaw Middle, said of his hours getting cut. “We started earlier but we were in and out of the school.”

Summer has always been the season for school cleaning. That hasn’t changed even though it is still uncertain when and how the schools will reopen to students.

“We’re concentrating on having the school cleaned by cleaning the airways and going into the classrooms and wiping down a lot of the things like the whiteboard, desks and shelves,” said Michael Grant, the building manager at Waccamaw Elementary, where custodians work eight-hour days on Mondays and Tuesdays.

Heating and air systems  are a new district priority.

At Waccamaw Intermediate, they have already done most of their major cleaning.

“We got a jump ahead of things when the virus came out in March,” said Charles Ray, the building manager. “We have the inside clean and ready to go.”

They still disinfect the entire school once a week on Monday mornings and afternoons.

“Teamwork is very important,” said Michael Thomas, a custodian at the intermediate school. “We have to make sure things are done properly.”

When the buildings reopen to staff and students, cleaning schedules will change again.

“You cannot clean too hard while school is going on during the day due to the fact that so many kids have different kinds of ailments,” Grant said.

“When everybody comes back, we want to make sure that no one gets sick,” Wilson said.

Staggers has done custodial work since his freshman year at Andrews High School in 1981. He has never encountered anything similar to COVID-19.

“We never thought we’d live to see the day the church shut down,” he said. “There’s nothing we can do about it except pray.”

Grant, a custodian for over 30 years, said even though the pandemic is different, the cleaning has mostly stayed the same.

“We normally try to clean hard every day while school is in and clean really hard during the summer,” Grant said. “But, with this pandemic, we’re trying to step it up another notch by trying to clean harder.”

While custodians may go unnoticed during the school day, their work isn’t taken for granted.

“We are behind the scenes but the staff members at Waccamaw Intermediate, they’re very awesome to us,” Ray said. “They let us shine when we don’t even know we’re shining. It’s very nice to work here.”