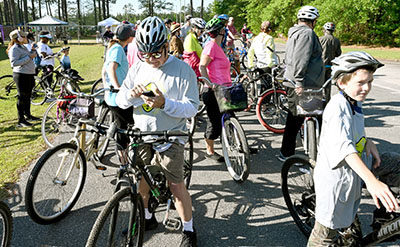 Dr. Gerry Harmon, the tour’s honorary chairman, programs the route at the start of the ride.

The road stretches out between stands of pine, broken by stray fingers of cypress swamp and overhanging oaks. There are no houses, but there are gates that announce the rice plantations that gave Plantersville its name.

The geography of the community along the Pee Dee River is the mirror image of the Waccamaw Neck, just 3 miles to the east as the rice birds fly, but 25 miles by road. Getting people across the Waccamaw and Pee Dee rivers is one of the goals of the Tour de Plantersville, which drew over 225 cyclists last weekend.

“I thought it was a great place to ride,” said Jeff Ciuba, who rode with his wife, Cindy, on a 10-mile tour. The Murrells Inlet resident is one of the organizers of the Inlet-to-Intracoastal project that will extend the Bike the Neck path to the Waccamaw River.

The tour is organized by the Village Group, a nonprofit that runs after-school and summer programs for children. It has also partnered with the Georgetown County Historical Society to open a cultural center at the corner of Highway 701 and Plantersville Road, the start of the 12.5-mile state-designated Plantersville Scenic Byway. Ray Funnye, the founder and executive director, said he thinks there is potential for tours to operate between the Waccamaw Neck and Plantersville, making the short trip by boat to Dirleton Plantation, which is owned by the state Department of Natural Resources.

This was the second year for the Tour de Plantersville, and the growth from 100 cyclists in the inaugural ride showed that the area has appeal. Two former rice plantations, Arundel and Chicora Wood, opened their grounds for the cyclists.

“It’s a great idea,” said Katherine Saenger, who came from Charleston with her husband, Don Sparks, for the ride. “It’s a good excuse to come to Georgetown.” They and their dog Alp stayed in town the night before.

“We don’t do many group rides,” Sparks said. “We’re a group by ourselves.”

They brought a tandem bike with a trailer for Alp. They were among about 20 cyclists who set off for a 40-mile circuit that also included areas along the Black River. Sparks and Spaenger planned to take their time. They once cycled from California to Charleston and spend summers cycling in Europe.

Alp rode most of the way, but logged about 5 miles on foot, they said afterward.

Cyclists ride under the oaks at Chicora Wood plantation.

Charles Knox of Myrtle Beach also took the 40-mile circuit. It was familiar ground. “I grew up here. My mother’s house is just through those trees,” he said, pointing across the ballfield behind Plantersville Elementary School.

As a kid, Knox didn’t do much bike riding. “I started about five years ago,” he said. He did a 250-mile ride last summer.

The Village Group has its own cycling club, the Plantersville Flyers. They played host to Momentum, a cycling club from First Baptist Church in Greenville, on Saturday.

Dr. Gerry Harmon also came up from Charleston for the event. He lives in DeBordieu, but was at a medical conference. He was the tour’s honorary chairman. “Don’t get distracted by the scenery,” he told the riders. “I did this last year and bumped a couple of people.”

Harmon was pleased with the turnout and said the rewards more than outweigh the risks from sightseeing. An hour of bike riding adds four hours to your lifespan, he said.

Scott Cook rode in a 25-mile group. He wanted to get a group of riders from Waccamaw Intermediate, where he is the guidance counselor, for the 40-mile ride, but was thwarted by the school’s spring break.

“I didn’t even hear about it last year,” Cook said. “I’ll definitely be back next year.”