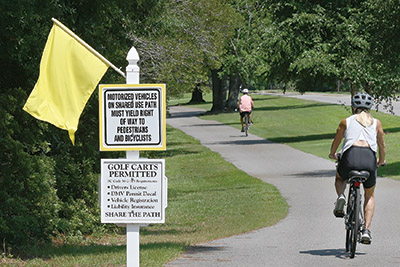 A flag draws attention to the rules of the road on the Willbrook path.

A cyclist who was injured in a collision with a golf cart claims Georgetown County bears responsibility because it fails to enforce an ordinance against motorized vehicles on bike paths. The accident occurred last summer on the bike path that runs along Willbrook Boulevard, the one section of the Bike the Neck route where golf carts are allowed.

Angela Conrad was riding her bike east on the Willbrook path just before 5 on a July afternoon in 2020. She collided with a 2015 E-Z-Go golf cart driven by Larry Ben Houck, injuring her right ankle, according to the complaint.

Conrad sued Houck, the county and the Willbrook Plantation Road Maintenance District, which maintains the path. She is seeking actual and punitive damages.

While the suit filed in Circuit Court last month claims that Houck was driving recklessly, it also claims he was violating the county’s ordinance that prohibits golf carts on bike paths.

Allowing golf carts on the bike path created an “unsafe and hazardous condition,” the suit claims.

The road maintenance district posted signs allowing golf carts on the path in spite of the county ordinance, it claims.

The path along Willbrook Boulevard was built by the Litchfield Co., which developed the former Willbrook Plantation.

“They wanted to be able to sell lots and tell people they had beach access without driving,” said Linda Ketron, a founder and long-time head of Bike the Neck. The nonprofit started planning and raising funds for a bike path along Waccamaw Neck in 1994.

The Willbrook bike path connected with portions of the Bike the Neck path that ran parallel to Highway 17. Eventually the Bike the Neck route shifted west to Kings River Road and Waverly Road, where a new phase is planned to reconnect with the bike path along the highway in Pawleys Island.

Golf carts are not allowed on the Bike the Neck path. That was a condition of funding from the state Department of Transportation, Ketron said.

The Willbrook Boulevard path was deeded to Georgetown County by the road maintenance district along with the road itself in 2005. The district retained an easement to maintain the bike path, landscaping, signs and street lights.

“They stipulated that was grandfathered in because it was private and they had paid to put it in,” Ketron said.

The county agreed, she said, because the road maintenance district would maintain the bike path.

thousands of dollars to maintain it,” said David Philips, who chairs the road maintenance district. Its funding comes from assessments on property in Willbrook.

Philips said he was not aware of the suit.

“From Day 1, this goes back to the early ’90s, we’ve always operated it golf-carts-permitted,” Philips said. “People would be really disappointed to see the golf carts disappear.”

In addition to posting signs that say golf carts are allowed, the district also posts signs that highlight the state law that requires golf carts be driven by licensed drivers and that they be registered and insured.

Philips put up a yellow flag at the intersection of Reunion Drive  to draw attention to the sign.

“Somebody stole it,” he said. Philips had a spare. “It just draws people’s attention to those rules of the road.”

Ketron would prefer that the county’s prohibition against motorized vehicles on the bike path be applied uniformly. “I have continued to defend, albeit reluctantly,” the Willbrook Boulevard exemption, she said. But she is concerned that the portion of the Bike the Neck route from Litchfield by the Sea to North Litchfield is seeing more golf cart traffic in spite of the county ordinance.