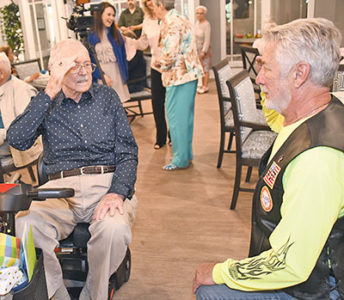 Dalton Paschal returns a salute from Gary Group during his 100th birthday party.

Dalton Paschal turned 100 last week. He was lucky to make it out of his 20s and still has the shrapnel as a reminder. It’s lodged in his left leg.

He has been reading up lately about the battles that took place 75 years ago along the German border as Allied troops made their final push to defeat the Nazis. “I was right in the middle of it,” Paschal said.

He still sports the mustache he wore in the Army as a 25-year-old draftee in 1944. It’s a little fuller, but he’s had a full life. Most of it was spent in Georgetown, in the Maryville neighborhood along Winyah Bay. He spent 30 years working for the Coca-Cola bottling plant, then took a job as an electrician for the Georgetown County School District. He attended Screven Baptist Church every Sunday. His wife Nell was the church secretary. They raised two daughters.

Paschal left his wife and oldest daughter in March 1944.

“I was inducted at Ft. Jackson. I went from there to armored basic at Ft. Knox, Ky. When I finished armor, they said they had too many tankers and they moved us into the infantry,” he recalled, sitting on the edge of his bed at Arbor Landing while the balloons from his birthday party bobbed gently in one corner of the room.

After advancing across France from the Normandy invasion beaches in the summer and fall of 1944, the Army didn’t need tank drivers. They needed infantry for the final push into Germany. Paschal joined the 275th Infantry Regiment, which was rushed out of training to fill that need.

“Our division was sent over as a cleanup unit. They thought the war was about done. They told us to take your bathing suits because you’re going to need them. You’re going to be in leisure,” Paschal said. “We caught everything but leisure.”

The regiment sailed from Boston to the port of Marseille in southern France. They arrived in December and headed north to join the Seventh Army. In the snow and cold, they were met by the Germans, who launched their last major offensive in the west.

“It was during the Battle of the Bulge. They were all around you. Everywhere you looked you could see them. That’s when all hell broke loose. They come from all sides. Tanks coming in. Half-tracks,” Paschal said.

Operation Nordwind, called the “other Battle of the Bulge,” began on New Year’s Eve along the River Saar.

“I was in mortars,” Paschal said. “The Germans knew every place we fired.”

His job was to fire the 4.2-inch M2 mortar. His partner Marty carried the shells. A forward observer would telephone the target to Paschal. “He gave orders on where to shoot, how far to shoot. If you fired right, he’d tell you to fire for effect,” he said.

To get the proper distance, Paschal would pull tabs from the base of the shell that contained the propellant. “You pull the increments off compared to how far you want it to go,” he explained.

“The captain told us, when you fire you’d better get the hell out of there because they’ll put a barrage of fire in on you,” Paschal said. “You get in those battles and you wonder if you’re going to make it. I didn’t think I would ever come back from France.”

Paschal never made it to Germany. He doesn’t remember exactly when he was wounded, but he said it was on the eve of the operation to cross the Rhine River near Saarbrucken. He remembers the place. It was Saarguemine, a town on the French side of the river that give both places their name.

Paschal was firing his mortar. “I didn’t get out fast enough,” he said. A German 88 mm artillery shell burst at treetop height. “A piece of shrapnel went into my belly,” he said. It stopped in his leg.

“We were supposed to go into Germany the next morning,” Paschal said.

Instead, he went to a field hospital for about a month and a half. He was shipped home, first to Boston Naval Hospital and then to a hospital in Georgia. “I didn’t have enough points to get out, so they sent me to Camp Croft,” Paschal said.

The camp outside Spartanburg was a training facility for replacements. A Capt. Haney from the 275th accompanied the wounded back from France. He gave Paschal the option of supervising the shooting range, joining the MPs or cooking.

“I said, ‘Well, let me try the MPs.’ I polished up my boots and got me an armband,” Paschal said.

Spartanburg wasn’t the front line, but there was still fighting.

“They had a ruckus in a beer hall one night and they called us out. I went into the beer hall. A soldier come out, he had his teeth in his hand. I said, ‘What in the world is this?’ ” Paschal recalled. “Somebody hit him in the mouth with a beer bottle and knocked his front teeth out. I went back and told Capt. Haney, ‘I have seen enough blood in this war.’ ”

He tried cooking. “I ain’t never boiled water,” he said, but there were five others to do the cooking and a manual to tell them how. “They put me over the kitchen.”

That’s where he stayed until he was discharged. He left the Army with one stripe, a Purple Heart and a Bronze Star.

It was ice that brought Paschal to Georgetown in 1939 from Leaksville, N.C., a town in the Piedmont where he grew up as one of five boys. He worked at the ice plant in town and went to Georgetown when the owners decided to expand. He met Nell Altman, the valedictorian of the first class at Pleasant Hill High School. They married in 1940.

When Paschal returned from the Army, he worked for a time at the ice plant before joining the Coca-Cola plant. A private first class in the Army, he became a “general flunky” for the bottling plant. He worked his way up.

“One day the boss called me and said, ‘I like to play golf,’ ” Paschal said. He wasn’t a golfer, so he became the assistant manager.

Of course people want to know the secret to his longevity. Was it the Coke? “I drank a lot of it,” he said.

Although his father died at 78 and his mother died in childbirth, his maternal grandmother lived to 101, he added.

But Paschal attributes his health to “working day and night. We had a bunch of machines at International Paper Co. and I was called out day and night to repair them,” he said.

In his spare time, he liked to fish. A painting he did of the Georgetown lighthouse hangs in his bedroom. “I had a boat and I’d go to the jetties. I passed it a lot of times,” Paschal said. “We’d go to North Inlet and gig at night. We’d get a whole cooler of flounder. Now, you can’t do that.”

When he retired, he and Nell traveled. Hawaii. Canada. The Bahamas. Vegas. He found the Grand Canyon particularly memorable.

He never returned to France. “I’d like to go back, but I’ll never go,” Paschal said.