Damage may fall short of threshold for federal aid 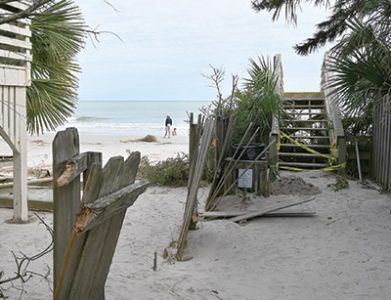 All the walkways at public accesses on Litchfield Beach were damaged.

“It’s a mess,” said Bill Caughman, who had 3 feet of water under his house on the north end of Pawleys Island. “No one expected it. And coming in on a high tide, it was the perfect storm.”

But even with a storm surge estimated at around 9 feet, Ian was not bad enough to trigger the federal disaster aid that has helped pay for the recovery from past storms, officials say.

The Federal Emergency Management Agency will provide assistance to the state and local governments for cleanup and repairs when the damage to public facilities exceeds $9.9 million.

“I was told just don’t count on getting there,” said state Rep. Lee Hewitt.

That was the same message received by Pawleys Island Mayor Brian Henry.

“They were pushing to say we have to get to that number,” he said.

The problem is that Hurricane Ian’s damage was strictly local.

The Category 1 storm made landfall Friday at North Island on the southern tip of Waccamaw Neck. That put the rest of Georgetown County’s coast in the northeast quadrant, where the impacts are greatest. The sustained winds were 85 mph, but Ian arrived on a high tide that added to the storm surge in the creeks and marshes behind the barrier islands.

Hewitt watched the water rise over his creekfront lot on Murrells Inlet. His flood elevation is 9 feet.

On Pawleys Island, former Mayor Bill Otis saw the waves breaking in front of him as he looked out the front windows of his home on Myrtle Avenue. On the creek side of the house, the water also reached 9 feet above the mean high water.

“It was higher than any storm since Hugo,” said Glenn Cox, who was shoveling mud from under his house on the north end of Myrtle Avenue.

The state Department of Transportation had crews lined up Saturday morning to start clearing sand from the roads on the south end of Pawleys Island and Garden City.

Hewitt said the agency director, Christy Hall, who visited the area Saturday, told him she expected the total cost of the cleanup for DOT would be $3 million. The emergency preparations around the state are expected to total about $1.5 million.

“Where do you get the rest of it?” Hewitt asked.

Although half of the Pawleys Pier was destroyed, that is a private structure. “My understanding is, that would not count,” Hewitt said.

The pier was insured for $5.5 million, Henry said.

The town has a $1.5 million operating budget, funded through taxes on short-term rentals and a portion of insurance premiums paid on the island. It doesn’t have a municipal property tax.

“We’ve got a challenge. We need some federal assistance,” Henry said.

The town is making plans to scrape sand from the beach to replace the dune between First Street and Third Street on the island’s north end. Ian washed out sand that had been placed above First Street by a renourishment project in 2020.

“It certainly did impact that dune north of the pier a little bit more than other areas,” said Steven Traynum of Coastal Science and Engineering, who managed the renourishment. “We’re not huge fans of beach scraping in general, but after a storm like this, it does make sense to get some of that sand up to the dune line fairly quickly.”

With no further storms this year, the beach should recover as sand moves in the wind and currents, he said.

The town also plans to reshape the sand moved from under houses on the south end, Henry said. The focus is on reducing damage from winter storms.

Hewitt is working with the governor’s office to get state funding to help the town and Georgetown County.

“This kind of storm just kind of wipes them out,” he said. “The impact it has is tremendous.”