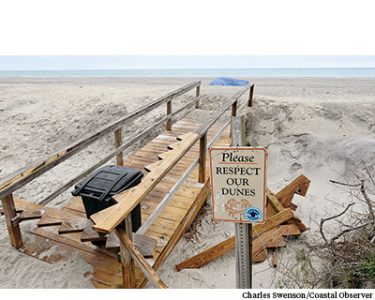 The Corps will erect sand fence and plant beach grass on the new south end dune this year.

As a $14.3 million beach renourishment project reaches the halfway mark, the town of Pawleys Island is considering an agreement with the Army Corps of Engineers that will help fund future projects. But that will almost certainly require the town to condemn easements for that work from property owners on the island’s south end, according to the town administrator.

“There’s no doubt in my mind that you’re talking about the condemnation of at least two,” Administrator Ryan Fabbri told Town Council this week.

A deal with the Corps means the town will be eligible for future federal funds to maintain the renourished beach. Also, as a federal project, the Corps will restore the beach if it suffers major storm damage. The town would only get aid if the damage is caused by a federally-declared disaster, and it would have to pay 25 percent of the repairs.

“It all sounds great,” Fabbri said. But the town will have to obtain easements from 113 property owners that will allow construction and maintenance of the beach. It has all but 13 now.

The town worked with the Corps for 20 years to develop a renourishment project for the south end. The work was approved by the agency, but never funded by Congress. The town was about to put its own project out for bid in 2018 when federal disaster funds became available.

After working with the Corps for another year, the town again decided to pursue its own project because the Corps wanted an updated cost-benefit analysis to justify spending the federal funds.

The current project will place up to 1.1 million cubic yards of offshore sand on the beach from the south end to a point somewhere north of Pawleys Pier. Most of the sand will be placed on the south end, where the island is narrowest and the erosion rate is highest, said Steven Traynum, project manager for Coastal Science and Engineering.

The town started work in October. At the same time, the Corps’ Charleston District received approval to fund the Pawleys renourishment project.

The town signed a “memorandum of understanding” with the Corps that would allow it to get credit for the work on the south end as if it had participated in a Corps project.

The town has also struggled to find ways to fund future renourishment projects. It has no municipal property tax, but the Town Council last year considered seeking approval from the state legislature to impose one that would be restricted to beach management.

As a Corps project, the town would only have to pay half the cost of future renourishment for the south end, which would be scheduled every nine years.

Also, part of the cost of the current project would be credited toward the local match.

“We don’t have to come up with a penny for 20 years,” Mayor Brian Henry said. “That opportunity outweighs any negative.”

That includes using the power of eminent domain to obtain the easements.

Of the 13 missing easements, five were never signed and eight were rejected by the Corps because they had been altered.

Fabbri has talked with all those owners in the past. He told Town Council some will not sign, but agreed to contact them again.

Council Member Rocky Holliday said they may feel differently now that there is a 100-foot wide dry sand beach on the south end at high tide.

If not, “you’ve got to do what’s right for the island as a whole,” Henry said. “How are you going to fund future renourishments?”