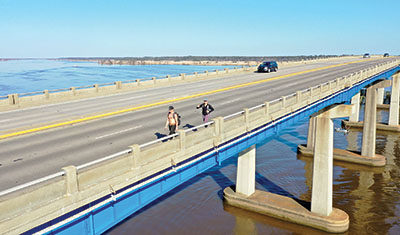 Jessie Grieb and Mike Plante cross the Waccamaw River last week on their walk to Florida.

Jessie Grieb and Mike Plante share several bonds. They have both struggled with addiction and lost brothers to overdoses.

They are now sharing the road as part of the East Coast Overdose Awareness Walk from Fort Kent, Maine, on the Canadian border, to Key West, Fla.

“It’s been hard trying to process a lot over years and I still struggle with it on this walk,” Grieb said. “It’s probably been the best thing for me and I’ve had a lot of healing. But when I go into those depressions it’s hard.”

She was inspired to walk after meeting Brett Bramble last March. He was walking from Key West to Fort Kent in honor of his sister who died of an overdose and stayed with the Grieb family while passing through Pawleys Island. A few months later Grieb was visiting Maine and joined Bramble for the last 300 miles of his walk. At the time she had just gone through detox.

“In the beginning I was in such a bad place, I was struggling so, so much. When I joined Brett it was the hardest thing I’d ever done in my life,” Grieb said. “The first three days we did 60 miles. During that time we both talked about me turning around and going back to Key West. I loved what he was doing and I saw how much it helped him, especially with dealing with grief and all that. So I really wanted to dedicate my time to it as well.”

“I could barely walk down the street to the gas station but when I was in Fort Kent I loved it, I loved doing the walk,” Grieb said. “It was really hard at first. Ninety degree weather and hills and blisters on my feet.”

Plante, 27, a native of Charleston, Maine, found out about Grieb’s walk on Facebook and contacted her. When they started communicating he realized how much they had in common. He lost his brother, Dustin Mitchell, to an overdose.

“At the time I had a pretty severe drinking problem and I was just endangering myself and making horrible decisions,” Plante said. “I jumped on this walk with her and went through my detox.”

Grieb was about 260 miles into the walk when Plante joined her in Ellsworth, Maine. It was just her and a cart she borrowed from Bramble nicknamed “Lt. Dan” to carry all her supplies.

At first, Plante was shocked that Grieb was easily walking 20 miles a day.

“Seeing her being able to do that, I was like ‘you got this Mike quit being a little baby. Keep walking.’ I did it and it was crazy,” Plante said. “It just showed me so much of what I could do and I can’t thank her enough for giving me this opportunity.”

Plante walked with her to New York and then went home for a few weeks.

It was a “rough” time walking alone, Grieb said. “You just spend day after day by yourself walking, especially in an area where there was nobody around [and] nothing. It was a hard time to get through.”

She nearly quit around the halfway point of the walk in Maryland.

“My cart kept breaking and it was raining every day and I broke out in poison ivy,” she said. “I just felt defeated and I was just losing my mind.”

She called Bramble and he talked her through it.

“I’m glad I didn’t,” Grieb said. “You look back at stuff like that and I’m glad I stuck with it.”

Grieb and Plante try to walk 100 miles every week. How far they walk each day depends on the weather and their mental and physical state. The most Grieb has walked in one day was 28 miles in Virginia.

“The walk is the best part. I love to walk,” Plante said. “When I stop the walk at the end of the day it’s hard for me because all my thoughts come flooding in. The walk is so distracting and wonderful. … You don’t have time for your own problems when you’re out there helping other people.”

Grieb likes to listen to music and dance while they’re walking.

“It’s 10 hours a day, every day. You’ve got to keep yourself entertained,” she said. “There’s days when we’re ready and in a great mood, and just like in life, there are days when I’m like, ‘God I don’t want to do this.’ ”

“Sometimes she’s got to keep my spirits up and when she’s not having the best day I keep her spirits up,” Plante said.

Grieb said every day she and Plante meet someone affected by addiction.

“Almost everybody we meet they at least know somebody, even if it’s their neighbor,” she added. “That’s how big of a problem it is.”

They’ve also met people who hate the problem and don’t care much for addicts.

“Regardless of what anybody thinks, at the end of the day we’re losing a whole generation,” Grieb said.

Grieb and Plante expect to be in Key West sometime in April.

“I think there are some moments when I’m ready for it to be over, but I know once it is I’m going to miss it,” Grieb said. “This is one thing in my life that I can say I did and nobody can take from me.”

Grieb and Plante are raising money to offset the expenses of the trip. To make a donation go to gofundme.com/east-coast-overdose-awareness-walk.