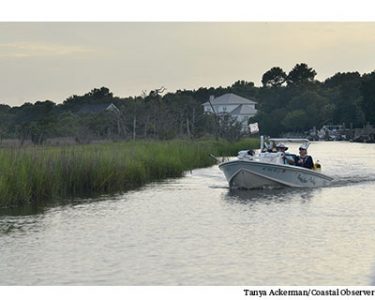 There are over 1,000 boats registered at DeBordieu.

Property owners at DeBordieu want to join the state of South Carolina in challenging an effort by the Belle W. Baruch Foundation to claim title to marsh lands in North Inlet. They dispute the foundation’s claim that it can trace ownership to colonial era land grants.

The foundation filed suit in Circuit Court in November seeking a ruling that it is the owner of about 8,000 acres between the mean high and mean low water marks on marsh land adjacent to 8,000 acres of high ground at Hobcaw Barony.

The claim drew objections from state Sen. Stephen Goldfinch, who said he tried to get the Baruch trustees to acknowledge the public’s right to use the marsh.

The state attorney general and solicitor general responded to the suit last month, denying Baruch’s claim, but asking the court to declare that a “prescriptive easement” exists on the marsh even if the foundation’s claim is upheld.

The foundation director, George Chastain, and its trustee board chairman, Ben Zeigler, have said that public access to North Inlet will not be affected.

The DeBordieu Colony Community Association this week asked to intervene in the case to protect the financial interest of property owners on the north side of North Inlet.

It argues that the suit would give Baruch “the right to terminate public access. There is no other explanation.”

If the court upholds the Baruch Foundation claim it would “destroy the value of investments DeBordieu has made over the past 40 years relying on its historic use and apparent right of access,” according to the court filing. “Part of DeBordieu’s allure is – and has been for generations – the right to freely use the disputed marshlands.”

“The most highly valued properties within DeBordieu are the 129 lots with boat access,” according to the filing by its attorney, Brian Duffy.

“The value of these investments will undoubtedly depreciate, if not be lost entirely,” if the foundation prevails, the association states.

Although the state also opposes the Baruch claim, the association argues that it needs to have “a seat at the table,” to protect its interests.

DeBordieu wants the case to be heard by a jury. The foundation and the state want it to be tried before a judge.

The state “lacks a direct economic interest in the outcome of the Baruch action: it holds the land in trust for the benefit of the public and has no personal stake in the matter. DeBordieu does,” the filing states.

DeBordieu also argues that even if the Baruch claim is upheld, the public has a prescriptive easement over the marsh lands.

“The Baruch Foundation’s sweeping grab of the tidelands poses serious concern for our property owners, but the issue goes well beyond DeBordieu to thousands of people who use the marshlands for fishing and many other recreational activities,” Blanche Brown, the association’s general manager, said.