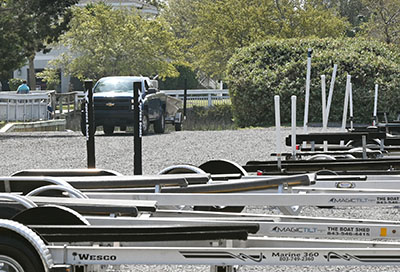 A boat launches at the DeBordieu landing. Property owners are concerned about access to North Inlet.

A Circuit Court judge last week denied the DeBordieu Colony Community Association’s bid to join a lawsuit over the title to marsh land at North Inlet saying there is no evidence that its members will lose access to the waterways.

The Belle W. Baruch Foundation filed suit against the state last fall seeking a ruling that it holds a king’s grant title to the intertidal land at Hobcaw Barony, which amounts to about half of its 16,000 acres.

The state has asked the court to deny the foundation’s claim or declare that the public has a prescriptive easement over the marsh lands. DeBordieu argued that its members have an economic interest in the outcome of the suit that cannot be adequately represented by the state.

Judge Paul Burch ruled that the DeBordieu suit doesn’t meet the standard required to intervene because its claims are “not a ripe controversy.”

“Title has nothing to do with rights of navigation over waterways,” the ruling states. If Baruch’s title claim is upheld, “the members of DCCA and the public still have the right to boat and navigate in the tidelands in question and North Inlet generally.”

At a hearing last month, Brian Duffy, attorney for DeBordieu, argued “this case is not just about title.” He said that ownership includes the right to exclude people.

Trenholm Walker, attorney for the Baruch Foundation, argued the state constitution protects the right of the public to use navigable waters.

In his ruling, Burch wrote that “the anticipated exclusion of recreational boaters and fishermen from North Inlet and other tidelands is an event that has not occurred and may never occur.”

DeBordieu asked for a jury trial. The Baruch Foundation argued that would delay the process. Burch agreed, saying that expanding the scope of the case “will not bear on the issue of legal title to the tidelands.”

Also last week, the Baruch Foundation and DeBordieu reached an agreement in a dispute over the association’s plans to build three rock and concrete groins as part of a project that will place 650,000 cubic yards of sand on the south end of the beach in front of DeBordieu.

The state issued a permit for the project last year. The foundation and the Coastal Conservation League appealed to the state Administrative Law Court saying the groins would cause erosion along the beach at Hobcaw.

DeBordieu says the groins are needed to hold the new sand in place and reduce the need, and expense, for future renourishment.

The Baruch Foundation withdrew its objection after DeBordieu agreed to reduce the length and location of the southernmost groin and increase the threshold for mitigation if there is increased erosion at Hobcaw. DeBordieu will obtain a $1 million letter of credit to fund any mitigation.

“Because Hobcaw is our neighbor, we were sensitive to the concerns expressed by Baruch board members,” Blanche Brown, the community association’s general manager, said in a statement. “So our board and their board developed a way to address their concerns while allowing us to proceed with our critical nourishment plans. It is a win-win situation.”

Following a conference call, Judge Ralph K. Anderson III dismissed the case, but said the Coastal Conservation League will still be allowed to object to the revised plan.

“It looks like our clients don’t agree with the settlement,” said Amy Armstrong, director of the S.C. Environmental Law Project, which represents the league.

A hearing is scheduled for April 20.