Delegation catches up on filling vacant board seats – Coastal Observer

Delegation catches up on filling vacant board seats 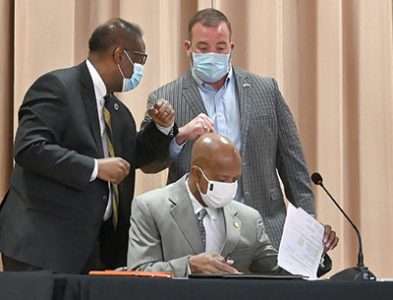 The board of the Georgetown County Water and Sewer District will be back at full strength for the first time in nearly four years if Gov. Henry McMaster approves four nominations from local legislators.

The delegation met this week for the first time in two years to fill vacant seats and renew expired terms of eight boards and commissions. “It’s been a real challenge over the last 18 months,” said state Sen. Stephen Goldfinch, who chaired the four-member delegation.

The long-time secretary to the delegation, Paulette Radcliffe, retired due to illness and a new secretary, Sabrina Todd, had to reconstruct the delegation’s history of appointments.

When state Sen. Ronnie Sabb joined the delegation in 2014, “there was a lot of uncertainty as to who was responsible for the nominations for particular seats,” he said. “What we have before us now is a road map.”

There were still a few detours on the way to making the nominations as the senators and state Reps. Carl Anderson and Lee Hewitt tried to establish a balance between representation for the Waccamaw Neck and the western part of the county.

Goldfinch recalled a deal that changed the makeup of the County Transportation Commission from two Waccamaw Neck representatives to three of the seven members.

“Somehow that appointment got mixed up,” Anderson said.

Later, Goldfinch realized the deal was for the Board of Voter Registration and Elections rather than the transportation committee. He said the legislators traded appointments so five of the nine election board members would be from the Waccamaw Neck.

Sabb said he didn’t remember that.

“I’m not sure that that’s consistent with the number of appointments,” he said.

All but one of the election board members’ terms had expired and one seat was vacant following the resignation of Dean Smith, who had served as chairman.

One of Anderson’s appointees had not applied for the election board before the March 25 deadline, although she had turned in applications for two other boards.

That appointment was deferred.

And the process left the current election board chairman, Billy Altman, without a nomination for a new term.

“I will plan to carry on until I hear otherwise,” Altman said afterward.

Hewitt said he thought he recalled seeing Altman’s name on the list of nominations signed by the delegation. It was his intent to reappoint him, he added.

“I think we have taken a huge step in the right direction,” Hewitt said. “It’s taken a lot of phone calls.”

In addition to coming up with a list of board members and which lawmaker nominated them, the delegation now has applications from people who want to serve that will be kept on file. Lawmakers gave credit to Danielle Novotny, who works for the Horry County delegation. She helped Todd recreate the Georgetown County delegation records.

Todd divides her time between the delegation office and the coroner’s office.

Anderson, a Georgetown Democrat, was elected to replace Goldfinch, a Murrells Inlet Republican, as chairman of the delegation. The position rotates every two years between the two parties.

The two have sparred in recent weeks over who is to blame for the delegation’s failure to meet. Each blames the other for a lack of communication.

Anderson, the senior member of the delegation, said he is committed to keeping the appointments up to date and making sure voters have a regular opportunity to share concerns with lawmakers. Five people spoke to the delegation this week about pending legislation and Lydella Washington of Georgetown, a long-time employee of the county library system, asked for its help with flooding at her home.

But the nominations were the focus of most of the meeting. The water district board had to amend its bylaws last year so it could continue to meet with only three members. Bill Schwartzkopf, who chairs the board, called the nominations “a good start.”

The new members are:

• Skip Corn of Pawleys Island, a real estate broker, who was the former CEO of the Egg Up Grill restaurant franchise. He was also the general manager of the TPC Myrtle Beach golf courses;

• Whitney Hills of Murrells Inlet, who is also a real estate broker. She served two terms as chairman of the Murrells Inlet 2020 revitalization group;

• Comeletia Pyatt of the Dunbar community, a former middle school principal who works in the human resources department of the county school district.

Among the other nominations included:

Board of Voter Registration and Elections | Philip Brady of DeBordieu, a real estate broker; Jay Sherman of Heritage Plantation, a long-time poll worker; and James Sanderson of Georgetown, head of the local Steelworkers Union, were new nominees. Jimmy Young, Linda Greene and Tracy Gibson, all of Georgetown, were nominated to new terms.

Murrells Inlet-Garden City Fire District | John Magann was nominated to a vacant seat. He is a former deputy sheriff who works for Tidelands Health. He is also a former volunteer firefighter. Kay Benton and Elizabeth Ward were reappointed.