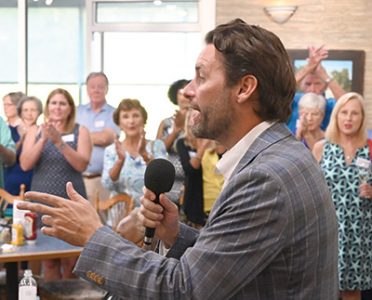 Joe Cunningham draws applause from voters at the campaign stop.

There are several freedoms on Joe Cunningham’s platform in his campaign to unseat Republican Gov. Henry McMaster, but the one that earned the loudest applause at a stop in Pawleys Island last week was abortion rights. The former congressman from Charleston is trying to become the first Democrat to win statewide office since 2006.

“It all comes down to freedom. I’ll leave it to women to make these decisions. Henry McMaster thinks that decision should be made by politicians. That’s a distinct difference,” Cunningham said before the event at the True Blue clubhouse. “It will be a very serious issue, and I don’t think most people view it through a partisan lens.”

But Democrats believe that the decision by the U.S. Supreme Court to overturn the guarantee of abortion rights established by Roe v. Wade in 1973 will bring the independent and crossover votes they need for an upset.

“Our campaign is a campaign of freedom,” Cunningham told an audience of about 75 people. “I’m talking about the basic, fundamental freedoms, like giving women the right to control their very lives.”

A state law passed in 2021 that would ban abortions after about six weeks is review by the state Supreme Court.

Even without the abortion issue, Cunningham, 40, frames the race as a campaign of ideas with his 75-year-old opponent.

“Gov. McMaster’s been leading South Carolina into the 1950s since the 1980s,” Cunningham told voters.

Cunningham wants the state to eliminate its individual income tax, which the legislature cut from 7 to 6 percent this year.

The tax is the largest source of state revenue, bringing in over $5 billion a year.

“We’re proposing a new streams of revenue to start with: legalizing marijuana, legalizing sports betting,” Cunningham said before the campaign stop. “And the truth is, the legislature’s going to have to step up and work with me on some things to cut back on, cut expenses, cut waste and also find additional streams of revenue without raising taxes.”

States without an income tax, like Florida and Texas, are growing.

Eliminating the income tax won’t happen immediately, he conceded, but he thinks he can do it or make a significant cut over two terms in office.

States without individual income taxes get most of their revenue from sales taxes. That’s what makes marijuana and sports betting attractive.

“You can look to other states that have done marijuana. Hundreds of millions of dollars, and often they exceed their anticipated growth,” Cunningham said. “Not to mention the jobs that come from it, whether it be agricultural or sales, etc.”

He is also counting on growth to generate more revenue, which Cunningham wants to spend to increase teacher pay and repair roads.

He acknowledged that not every community welcomes growth, but said there are opportunities to revitalize small towns that have struggled with population loss. That means expanding wi-fi access in rural areas so people can work from home.

“I mean, you’ve got wi-fi access at the top of Mount Everest, but you don’t have it in certain rural counties in South Carolina,” Cunningham said.

Growth also puts pressure on natural resources, “so there has to be that delicate balance of smart growth and not just packing people in,” he said.

“You know, I’m the only one in this race that believes in climate change,” he added.

Cunningham would like to see the state tap into the growing market for renewable energy.

“I’d like for South Carolina to be the No. 1 manufacturer of electric vehicles,” he said. The port of Charleston is on track to become the deepest on the East Coast and the interstate highways, once repaired, can help make that happen. “And we’ve got a workforce that’s hungry for it, but we just need the vision.”

Independent polls have show Cunningham trailing McMaster, though the margins have gotten smaller. He told supporters that his campaign’s own polls show that McMaster’s lead falls within the margin of error “when I put out my message next to Henry McMaster’s message.”

Cunningham was narrowly elected to the U.S. 1st District in 2018 after the incumbent Republican, Mark Sanford, lost in the primary. The GOP took back the seat in 2020.

“Folks told me a Democrat would never win in a gerrymandered district, a district Trump carried by 13 points,” Cunningham told supporters. “The state right now is better than that 1st Congressional District was in 2018.”