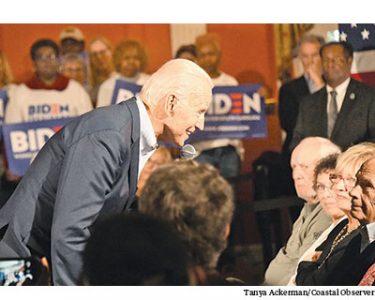 It’s been a mad dash to the finish for local Democrats this week as the presidential primary approaches on Saturday.

Candidates and their surrogates, including an Academy Award-winning actress, visited in the county as party officials pulled out all the stops to get out the vote.

The latest candidates to stop in the county were Joe Biden and Tom Steyer, who were a few blocks away from each other in Georgetown on Wednesday.

Many polls have Biden, who appeared at a rally inside the Winyah Indigo Society Hall, with a comfortable lead in the state. More than 100 people greeted the former vice president with chants of “let’s go Joe.”

Biden reminded people that he helped craft the Affordable Care Act, and get it passed, so he is the only candidate who has

actually done something about health care.

“The whole country is going to be better off when everyone has access to affordable health care,” Biden said. “I can get it passed in the first year. … We can cover everyone. We can get it done.”

Biden said he and President Obama knew Donald Trump was going to do a bad job as president; they just didn’t know how bad.

“We can have our children read about these four years of Trump as an aberration,” Biden said.

Melissa Gunn of Georgetown is voting for Biden because he’s open and honest.

Meredith Simms of Lake City brought her 10-month-old daughter, Adrienne, to the rally, along with her uncle, Joe Simms of Charleston.

“[Biden] is a moderate and I think he’s a good candidate,” Meredith said.

“He’s kind of a laid-back guy like I am,” Joe said. “He’s easy-going, not aggressive like Bernie [Sanders] or some of the others.”

Steyer stopped by Bethel AME Church and spoke to a crowd of about 100 people.

He called the Senate impeachment trial the “biggest cover-up in American history” and accused Trump of being on Russian President Vladimir Putin’s side when it comes to election security.  The GOP, he said, won’t do anything about it because they think the Russians will help them.

Steyer said he lives by something his father told him: “When you see something that’s wrong or evil in American society, you do something about it.” 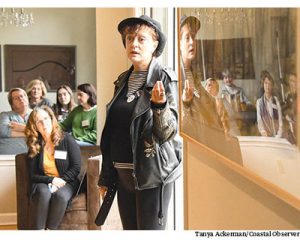 The day before, the actress Susan Sarandon stopped by a meeting of the progressive women’s group Club 142 to make a case for Sen. Bernie Sanders to about 60 people.

Sarandon said Sanders is the only candidate not bought and paid for by big money and who doesn’t have any skeletons in his closet. She said people need to unite and work together and encourage all the people who didn’t vote the last time to vote on Saturday.

Sanders is considered the front-runner for the nomination after winning in Nevada and tying with Pete Buttigieg in Iowa and New Hampshire. He made a stop in Myrtle Beach on Wednesday.

Sarandon said the Vermont senator has the “star power” to beat Trump.

The county party hosted a block party on Saturday with music, food, and speeches by representatives of several of the campaigns.

“We wanted to boost voter awareness and get people excited,” Smith said. “It was also a kind of a giveback. We just wanted to treat everybody and say ‘here, come have some fun with us.’ You can get some voter information while you’re here, or just dance to the music.”

“I find her to be a pragmatic progressive,” Bonner said. “She’s thought through how to enact the policies that she wants. She’s approaching it very analytically and pragmatically. … The two together, I think she’ll get things done.” 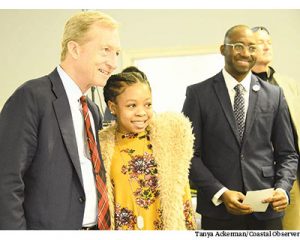 Wesley Gibson was one of two dozen people from Georgetown who traveled to Washington, D.C., and met with Steyer during “Need to Impeach” protests. Steyer organized the protest movement.

“Tom shoots straight from the hip, he tells it like it is and he’s accessible,” Gibson said.

When Steyer met with the Georgetown group in Washington, he told Gibson’s grandchildren how important it was to vote and took a picture with them. On Wednesday Gibson brought the picture of Steyer and his grandchildren to the church hoping to get Steyer to sign it.

“I appreciate that,” she said.

Burns has changed her mind about who she will vote for several times, especially after watching the debates. After one, she said she hated them all and wasn’t going to vote for any of them. She then decided to vote for Steyer.

Ryann Richardson, who won the Miss Black America pageant in 2018, attended the block party in support of Buttigieg. She believes the former mayor of South Bend, Ind., is the only candidate who can beat Trump.

“Obviously I’m concerned with the experience of black Americans and the potential that we have in this 2020 election, not to return to the status quo that never really works for marginalized people.”

Richardson said Buttigieg’s Douglass Plan, which is a “comprehensive investment in the empowerment of black America,” is unlike any ever put up by a candidate at any level.

“Frankly, it’s what black Americans have been campaigning for for decades.”

Smith said she was pleased with having so many campaign representatives at the block party since it was the same day as the Nevada caucus.

Emily Cegledy, a Democrat who is running for state Senate against Stephen Goldfinch, attended Saturday’s event to talk to voters. She said she has not decided who she is going to vote for in the primary.

A GOP chairman in the Upstate encouraged Republicans to vote for Sanders in the Democratic primary in the belief that Trump would have an easy time beating the self-proclaimed “democratic socialist.”

Karol Anderson, chairman of the county Republican Party, said she didn’t think there was a real push for that here.

“The state party took the stand on it. We’re not taking one,” Anderson said. “We’re not saying to do it or not do it.”

South Carolina doesn’t require voters to register by party. The state Republican Party decided not to hold a primary this year, pointing out that the Democrats didn’t hold a primary when President Obama ran for a second term.

The Democratic primary is open to anyone who registered to vote by Jan. 29. The polls are open from 7 a.m. to 7 p.m. Voters can check their polling location online at scvotes.org.

Voters need to bring a photo ID, such as a driver’s license, military ID or passport in order to vote.

Anyone needing a ride to the polls on Saturday should call the Democratic Party headquarters in Georgetown at 843-830-3996.