Despite storms, town moving ahead with beach project – Coastal Observer

Despite storms, town moving ahead with beach project 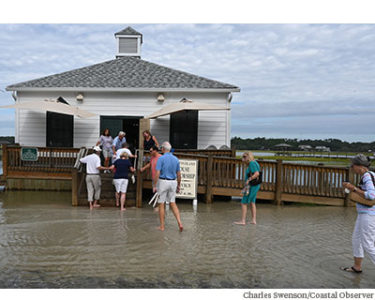 A high tide forced members of the Pawleys Island Civic Association to wade into the chapel for their annual meeting.

A beach renourishment project is due to start on Pawleys Island in less than a month. Even though it is the height of the hurricane season along the South Carolina coast, it makes sense to have the dredge in place, according to the project manager.

The Town Council is due to vote Sept. 9 on a project that will place 1.1 million cubic yards of offshore sand on the island’s beach. It has already approved a project with 700,000 cubic yards to start Oct. 1.

Mayor Jimmy Braswell told members of the Pawleys Island Civic Association at their annual meeting over the weekend that the start date was set by the contractor, Marinex Construction, which gave the town a break on the price set for the work a year ago before the town began a partnership with the Army Corps of Engineers to renourish the beach. But there is also a need to get sand on the beach, he said.

The town ended the joint project with the Corps out of concern that the agency wouldn’t conduct the larger project or, if it did, would delay the start of work beyond another hurricane season.

After Hurricanes Joaquin, Matthew and Irma, the town pushed up sand from the intertidal beach to rebuild the dunes. There is no longer enough sand in the system to scrape, according to the engineers that designed the project.

Having a dredge at work during the hurricane season means the town will be able to build up dunes as soon as a storm passes, said Steven Traynum, project manager with Coastal Science and Engineering, which designed the renourishment project. The dredge will pump sand from sites between 2 and 4 miles off the island’s south end.

If there is a storm, such as Hurricane Dorian, the dredge and heavy equipment will move inland. But they will return after the storm. Coastal Science will be tracking the volume of sand.

If there is a federally-declared disaster, federal funds will pay for 75 percent of any damage to the town’s “engineered beach.”

In addition to expanding the volume of sand, the town plans to extend the length of the project from 2.6 miles to 3.1 miles, reaching from the south end to Third Street on the north end.

The project will cost $14.4 million of which the town will pay $8.8 million. That includes borrowing $2.7 million. The rest will come from the state.

“How will we repay the loan?” Bebe Barton asked.

The money will come from the local accommodations tax which generates about $400,000 a year for beach management, Braswell said.

Robert Moser wanted to know who would manage a federally-funded project to repair storm damage to the renourished beach.

Coastal Science would do that, Braswell said.