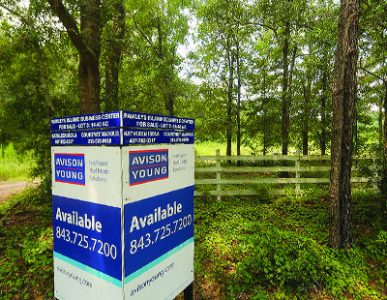 The site on Petigru Drive has attracted more attention than any other county property.

Property at Pawleys Island once envisioned as a high-tech park is being considered for high-density residential development. The proposal from Graycliff Capital Development is under review by Georgetown County Council.

“We’re struggling with what do we do with that property,” Council Chairman John Thomas said, adding that he opposes the plan.

Mercom renovated a former plant nursery on an adjacent tract and planned a 20,000-square foot facility at the park to accommodate a growing workforce. Instead, the firm laid off most of its staff and underwent a restructuring in 2018.

The county shifted its marketing toward an office park, but the idea was the same: create a development that will create jobs.

“Our vision for the property was that it would be a job hub,” said Brian Tucker, the county Economic Development director. “That’s why we acquired the property.”

Last week, the alliance board forwarded a proposal to County Council from Graycliff, which is willing to pay $1.38 million for the property provided it can build no fewer than 200 residential units.

Graycliff developed the Litchfield Oaks apartments, which it later sold, and the Waterleaf apartments in Murrells Inlet. The county earlier this year approved 143 units on 19.4 acres in the second phase of Waterleaf. The mix of two- and three-bedroom units was estimated to generate 1,040 daily traffic trips.

“We don’t have the infrastructure to support that,” said Jerry Rovner, an alliance board member, who said he opposed the Graycliff proposal when it was first submitted last October. “I got the board to agree.”

Since then, the alliance has begun to make payments on a loan from Santee Cooper that funded the purchase. “That was the impetus to do something,” Thomas said.

The property is zoned as a “planned development” with offices, lodging, shops and a restaurant. The county would have to change the zoning to allow an apartment complex.

No plan has been submitted, said Boyd Johnson, the county planning director. But he noted that the state Supreme Court has ruled that planned developments must contain a mix of uses.

“Whatever happens there is going to take months and months to plan and flesh out,” Tucker said. “What ultimately goes there is pretty wide open.”

Thomas pointed out that with 200 dwellings, the property would be close to the maximum density allowed under the zoning ordinance.

“The purchase would be contingent on getting County Council to rezone the property, and I don’t think that’s going to happen,” Thomas said. “The preference would certainly be to put something in there that would bring in jobs.”

“That’s why I’m against it,” Rovner said. “I was surprised that they came back.”

Because of the current planned development zoning, “we have a lot of control over it,” Council Member Steve Goggans said. “The county has a lot of leverage.”

The Graycliff proposal is only one of several he has heard about. Goggans said he doesn’t favor a project that doesn’t include some mix of uses.

The tech park was one of several sites that the county marketed for economic development, but it was the one that generated the most calls, Tucker said.

“We were going to exhaust all resources to find someone to fulfill that vision for the property,” he said. “That was getting a little stale.”

Even the office park concept is tougher to sell in the current economy, Tucker said.

Whatever happens at the site will require approval from the Economic Development Alliance and County Council, he added.

“We’re not going to just sell it without knowing what the end use is going to be,” Tucker said.

But Thomas doesn’t think high-density residential development is one of the options. Area residents have made it clear that they don’t want that kind of development.

Although the Waterleaf property was already zoned for high-density residential use, the second phase drew opposition from the community group Keep It Green.

The alliance decision wasn’t a recommendation for approval, Rovner said.

“It’s a procedural thing,” he said. “In this political climate, I don’t think it’s going to go anywhere.”