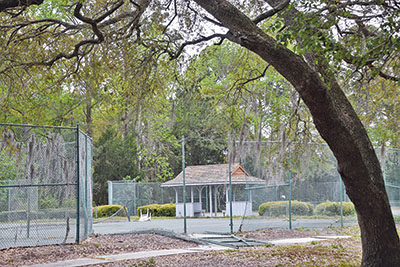 The developer says he will look at a single-family project for the site.

A developer has asked to withdraw a request to rezone the former Litchfield Racquet Club to allow 108 one-bedroom apartments. A public hearing on the project was scheduled today before the county Planning Commission.

The request from Trey Smith follows a recommendation to the commission from the county planning staff that it should be denied because the high-density development is not compatible with the nearby medium-density neighborhoods.

In a report to the commission, Boyd Johnson, the county planning director, cites four reasons for denial of a change to the current “planned development” zoning that is needed for the project:

• the stormwater pond required by the higher density would require 30 protected oak trees to be cut;

• a traffic study was not provided to show how the additional 751 daily car trips will impact the nearby intersection of Highway 17 and Country Club Drive;

• the future land-use map shows the area as “public/semi-public, which does not support high-density development.”

The property is owned by Founders National Club, which closed the racquet club in October. Smith, a developer who also lives next to the site, has an option to buy the 8.8 acres.

The project has generated opposition from residents in Litchfield Country Club and the Bridges at Litchfield, which border the site. A group of former club members wants to buy the facility and reopen the 17 clay tennis courts for play.

In asking to withdraw the rezoning request, Smith wrote the commission that, “After reviewing multiple letters from neighbors in opposition to condos as well as planning staff’s recommendation, we intend to work on a land use plan that consists of single-family homes. Hopefully this land plan will satisfy the relevant parties, while at the same time provide us with enough density to make the development financially feasible.”

The commission will have to vote to accept the request to withdraw. “I’ve never seen that not happen,” Johnson said.

The 108 units in nine three-story buildings were the most that could be built under the county’s zoning ordinance. The density of 16 units an acre was more than twice that of a previous phase of the racquet club development, Johnson said.

Planned developments are zoning districts with their own set of restrictions. Since the racquet club development was first approved in 1987, it has been amended by Georgetown County to add residential units and remove property that became part of the HealthPoint facility. The current residential density is 6.7 units an acre.

To handle stormwater from the proposed development, a 1.4- acre retention pond is shown along the property boundary with the Bridges neighborhood. That would have required cutting 30 oak trees with diameters of 10 inches or more, Johnson said. The largest has a 21-inch diameter.

“The need for such a large pond would likely be lessened were the density of the project significantly reduced,” he said in his report.

The proposed development would have kept the existing clubhouse for commercial use, but it had no amenities or open space.

A change to the county land-use plan to accommodate the development “should only be supported if the new plan addresses recreational needs or some sort of useable open space along with a proposed density more in keeping with the current development on the site or the density of the surrounding area,” Johnson said.

County Council Member Steve Goggans, whose architecture firm worked on the racquet club in the past, told the county Republican club this week the rezoning request was unlikely to win approval. “Based on the traffic alone, I don’t think there’s any chance the proposal will go through,” he said.

While there is interest in maintaining the courts, particularly for older players who find the clay surface puts less stress on their bodies, Goggans said the county would face legal issues if it tried to make tennis a condition of any zoning change.