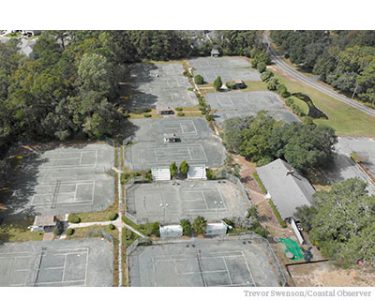 The property’s use remains limited to tennis without a zoning change.

The score stands at 4-0 in the fight over the future of the former Litchfield Racquet Club as another developer has asked to withdraw a rezoning request rather than face denial by Georgetown County Council. It is the fifth plan served up for the facility this year and the fourth to be withdrawn.

“We have withdrawn the application,” Dan Stacy, attorney for AmeriBuilt homes, said. “There was no viable path forward to modify the planned development.”

The property is owned by Founders National Golf, which bought it along with several golf courses owned by Myrtle Beach National. The tennis club and its 17 clay courts closed in October 2018.

Two plans for the property were proposed earlier this year by Trey Smith. One called for 108 one-bedroom apartments on the 8.5 acres adjacent to Litchfield Country Club, a community of single-family homes on lots of at least 10,000 square feet.

The apartment plan was withdrawn before a public hearing before the Planning Commission when county staff recommended denial. So was another plan for 32 lots of 4,600 square feet.

AmeriBuilt homes resubmitted the 32-lot plan, but also withdrew. It then proposed 19 lots with 10,000 square feet.

The Planning Commission voted 4-3 to recommend denial of the rezoning after a hearing that drew hundreds of people in opposition. Some of them want to buy the club and reopen it. They say Founders Group won’t talk to them.

Stacy said he made offers to would-be buyers from both Smith and Shawn Becker of AmeriBuilt, including one after the commission vote. “I never heard a response,” he said.

The rezoning was due to come before County Council next week. Council Members John Thomas and Steve Goggans, who represent the area, oppose the change. If voted down, the zoning ordinance would require the owners to wait a year before applying for another rezoning.

Without a change to the zoning, “it stays just like it is,” Boyd Johnson, the county planning director, said.

AmeriBuilt is building 14 duplexes that were previously approved for another portion of the planned development, which was created in 1987 to allow duplexes and tennis courts. Goggans, who worked on the plan before he was elected to council, said the multi-family units were offset by the open space containing the tennis courts.

AmeriBuilt no longer has an agreement to buy the 8.5 acres. “Now it will be up to Founders Group to decide what it wants to do,” Stacy said.

Without a zoning change, its options are limited to tennis courts, Johnson said. “The ball’s completely in their court.”