District adds to tax increase as other staff get pay raises 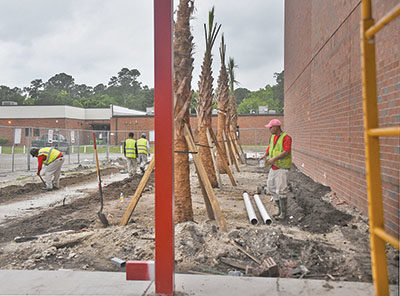 The district has created a new position, and filled it, to oversee maintenance of athletic fields and facilities.

To balance its 2020 budget, the Georgetown County School District is considering a 5.9 mill increase which would bring in an extra $1.7 million a year.

Earlier this year the district projected a $2.1 million deficit in 2020. With budget cuts, it was able to decrease that estimate to $1.1 million.

Last month, school board members discussed a 4.5 mill increase that would have added about $1.4 million to the budget.

But at that time the board also tasked finance director Lisa Johnson with balancing the budget.

“We’ve worked very hard to bring you a balanced budget,” Johnson told the board this week when she presented a draft of the new budget.

State law limits the ability of local government to raise property taxes using a formula that combines the federal Consumer Price Index and the percentage of population growth. For the Georgetown County School District, that was 3.1 percent of 3.4 mills. But state law also allows local government to add any increases from the last three years that it didn’t implement. That means the district can draw on the 1.1 mills it didn’t use in 2017 and the 1.6 mills it didn’t use in 2018.

A 5.9 mill increase would bring the tax rate to 115.6. That’s equal to $693.60 for commercial property or second homes valued at $100,000. Owner-occupied homes are exempt from property tax for school operations.

“We haven’t had one for awhile,” Board Member Mike Cafaro said. “I think at this time it’s just necessary.”

Board Member Richard Kerr said he was “reasonably happy” with where the budget ended up.

“We felt like at this point if we’re going to have a millage increase, let’s not take baby steps, let’s do it all at once,” Kerr said. “I’m never happy with a tax increase but sometimes it has to happen.”

The new budget includes $1.77 million to cover a 4 percent increase for teachers’ salaries and fringe benefits and an increase in the salary for a new teacher. Some teachers will get a bigger raise if they are also due for a step increase. The district is one year behind in step raises after freezing them during a recession a few years ago.

Support staff and administrative staff will also get 4 percent raises totaling $1.3 million. That’s up from 2 percent in an earlier budget draft.

Cafaro has always been an advocate of raises for support staff. “We’re not where we want to be, but yes, we are making strides,” he said.

The district is also required to increase its retirement contribution by 1 percent to $650,000.

A fire that destroyed a portable classroom at Waccamaw High School last year resulted in a $175,000 insurance payout that was transferred into the general fund.

Going forward, the district should be able to afford to maintain the salary increases and 2020 budget levels, Kerr said, unless the state cuts its funding.

“Every year you have to keep cutting or doing something,” he said. “You have two options: you either cut costs or increase taxes.”

Included in the budget is salaries and benefits for two new district staff level positions: executive director of high schools and athletics, who will oversee high schools, coordinate athletic events and be a liaison to the S.C. High School League; and coordinator of athletic facilities, who will be responsible for the maintenance of all athletic fields, gyms and field houses.

Kerr said although these are two new job titles, the positions are being filled by reassigning people and combining other positions.

The main qualifications for the executive director job are coaching experience and at least five years as a principal. The salary range is between $97,839 and $107,839.

“Somebody needs to be in charge to keep the coaches accountable,” Cafaro said, and take some of the burden off the shoulders of athletic directors, who are all also teaching and coaching.

On Tuesday, the board approved the hiring of Mike Johnson Jr. to be the coordinator of athletic facilities. Johnson is the son of the district’s finance director and retired Georgetown High baseball coach Mike Johnson.

Carafo said the district has invested millions of dollars in upgrading its athletic facilities and someone needs to look after them.