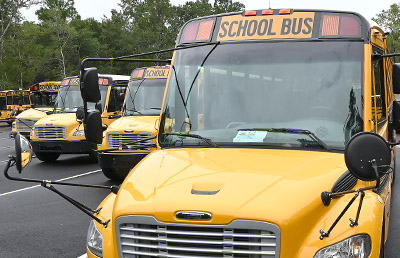 The school board set the minimum wage for classified employees at $13.

The Georgetown County School Board approved a $99.1 million budget this week that gives raises to all employees and increases the district’s salary scales and minimum wage.

The revised budget is $1.89 million more than the board approved last month due to an increase in state funding. The extra funding allowed the board to add $2,000 to the state mandated raises for teachers, bringing the total to the $4,000 the board supported at its June meeting.

In addition to the raises, the district increased salary scales for administrators, nurses, bus drivers, food service workers and other classified employees; the employee retirement rate; athletic stipends; and pay for substitute teachers.

The minimum wage for the district is now $13 an hour.

Board Member Randy Walker, who represents District 4, would like to see that increased to $15 a hour.

Board Member Mike Cafaro, who holds an at-large seat, made it clear that $13 an hour is only a starting salary for some new employees.

Marvin Neal, president of the Georgetown County chapter of the NAACP, has also called for a higher minimum wage.

“No one should have to leave an eight-hour job, doing an eight-hour workday and go to another job to survive while others reap the benefits of our tax dollars,” Neal said at an NAACP press conference outside the school district offices on Saturday.

Marilyn Hemingway, second vice president of the Georgetown NAACP, said raising some people’s salary to $13 an hour was an “insult.”

“Clearly the investment is not in our children and not in our support staff who allow this school district to open every day and educate our children,” Hemingway added.

Neal has also consistently criticized the district for its hiring practices.

He called on the school board to hold Superintendent Keith Price accountable for what he called “unfair hiring practices and low wages.”

“For decades, long-suffering Black employees have been denied employment and opportunities by those in leadership positions at the Georgetown County,” Neal said. “Unfair hiring practices and low wages are detrimental to the rural communities in Georgetown County, particularly the Black communities and working class who make up the majority of the custodians, cafeteria workers, bus drivers and support staff.”

The district has been under a consent decree stemming from court-ordered desegregation in the 1970s. The decree was signed in 1997 after the Department of Justice claimed that the district had failed to abide by the terms of earlier orders from the federal courts.

Under the decree, each district school is required to have a staff whose racial mix is within 10 percent of the racial mix in the county as a whole. The decree also restricts student transfers and requires that educational opportunities for students at three predominantly black elementary schools – Browns Ferry, Sampit and Plantersville – and the Carvers Bay schools “are unsurpassed in the district.”

Neal said the situation in the district is worse now than when the consent decree was approved in 1997.

“Why should we continue to keep someone in a position that’s going to continue to go in that direction,” he added. “It’s the same good-ole-boy system.”

Neal said he was going to contact the U.S. Department of Justice about where the consent decree stands and ask that an investigation be opened into human rights violations by the district.

Price declined to comment this week about the NAACP’s claims.