District finds a third of students failed a class 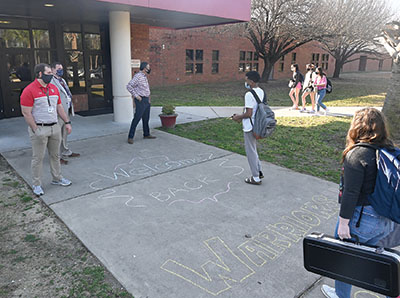 Students arrive Monday at Waccamaw High for the first week of four-day classes. They go to five days next week.

More than 1,600 county students in grades two through eight  failed at least one class during the first quarter of the school year.

That is 36 percent of students in elementary, intermediate and middle schools.

“We’ve known that the pandemic was going to have an impact on performance and this data just justifies and validates what we were thinking all along,” Superintendent Keith Price told the school board this week.

The percentage of students who failed at least one class dropped to 1,479 (32 percent) in the second quarter.

This is the first time the district has compiled data for all schools. Principals are known to use data from their own school to identify students who are struggling.

In the first quarter that ended in mid-November, English accounted for the largest share of classes failed: 23 percent. That was followed by math, 21 percent; social studies 19 percent; science, 17 percent; fine arts, 14 percent; and other classes, 6 percent.

In the second quarter that end in early February, fine arts accounted for the largest number of failed classes, 25 percent.

David Hammel, the district’s executive director for accountability and assessment, told the school board that sometimes middle school students who are struggling will concentrate more on their core subjects that count toward promotion than on electives.

English accounted for 20 percent of failures in the second quarter, followed by math, 19 percent; social studies, 18 percent; science, 13 percent; and other classes 5 percent.

“You can see the impact the pandemic has had,” David Hammel said.

Board Member Patti Hammel, who represents District 1, is most concerned about the seventh- and eighth-grade numbers.

“Those middle grades are the areas we need to give some attention to as we move forward,” she said. “My concern is that we help our students fill those gaps.”

For high school students, 23 percent (597 students) failed at least one class in first quarter and 21 percent (530 students) in the second quarter.

Ninth-graders had the largest percentage of failed classes. Twenty-three percent of freshmen failed at least one class in the first quarter and 21 percent in the second quarter.

David Hammel told the board that ninth-graders typically have the highest percentage of failed classes among high school students in any school year.

Twelfth-graders failed the least amount of classes in both quarters. Math was the highest, accounting for 24 percent of the first quarter failures and 21 percent in the second quarter.

English accounted for  21 percent of failures in the first quarter and 18 percent in the second quarter, followed by science,  17 percent and 14 percent; and social studies, 13 percent and 12 percent.

Nearly half of high school students failed end-of-course exams at the conclusion of the first semester in early January.

Those exams counts as 20 percent of a student’s final class grade.

But while the failures in Algebra 1 were up this year to 69 percent, more than half of students failed the exams in the two prior years, according to district data.

In Biology 1 and U.S. History, more than a third of students failed the exam in the two previous years. This year, more than half failed.

Dumm noted that there was 6-point difference in the average score of students who attended the two days of in-school classes under the hybrid program (66) and those in the virtual program (60).

“It’s clear the pandemic has magnified some of the challenges we have,” David Hammel said.

There are 1,000 fewer students in the district’s virtual program in the second semester than the first.

“That should hopefully helped,” Price said. “It’s very hard to keep students engaged when you don’t have them right in front of you.”

Genia Smith, the district’s executive director of innovation and special programs, is working with her staff to get the remaining virtual students more engaged and doing more independent reading.

The district began the school year in a remote phase and then brought students back into classrooms in mid-September in its hybrid phase.

Board Member Pat DeLeone, who represents District 2, has advocated for having students back inside classrooms for four or five days a week since November. She blames the amount of failed classes and failed end-of-course exams on the two-day-a-week schedule.

Patti Hammel expects to see improvements in the next set of end-of-course exams.

“Our teachers have done all they can do, but it’s still very difficult with two days a week,” she said. “There’s a reason why we need five days of instruction.”