Do wood ducks come home to roost? Study will find out – Coastal Observer

Do wood ducks come home to roost? Study will find out 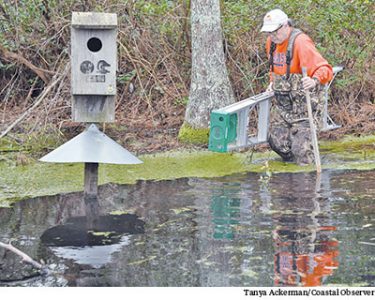 A local Clemson University researcher is studying whether female wood ducks, like female sea turtles, return to where they were born, or return to the same area over and over, when they are ready to lay their eggs.

Rick Kaminski calls the process “recruitment.” He is the director of the James C. Kennedy Waterfowl & Wetlands Conservation Center at the Baruch Institute of Coastal Ecology inside Hobcaw Barony.

“What is the rate at which hens, and their daughters, return to these boxes to nest?” said Kaminski, who has spent the last 35 years studying waterfowl habitats and populations.

The wood duck is the state duck of South Carolina. Some migrate to the state, but others live here year-round.

Wood ducks are “secondary nesters” since they do not create cavities to nest in.

“They’re not like a woodpecker and peck their own hole,” Kaminski said.

Wood ducks find naturally created cavities, or cavities that were created and used by other birds and then abandoned. Wood ducks nest in trees to keep the eggs away from predators.

Kaminski and his students tag the female ducklings before they leave the nest and then check the adult wood ducks that return to nest for a tag.

The boxes were originally used for a nesting study of three species in 2016 and 2017 by Gillie Croft, a Clemson graduate student. Croft surveyed 360 boxes along the South Carolina coast and found that 61 percent were used by wood ducks, 15 percent were used by black-bellied whistling ducks, and 1 percent by hooded mergansers.

Although Croft was the first to study “duckling production rates” along the South Carolina coast, he did not track whether females returned to the area where they are born.

Kaminski is seeking funding for a student to study the boxes at Hobcaw, which is a natural environment, and DeBordieu, which is residential.

“We need to compare production of these two contiguous, but very different environments,” Kaminski said.

“Are we recruiting enough females to come back to occupy these boxes, and recruiting young to sustain the local population, or do we have to recruit immigrants from … natural cavities or nearby nest box programs?” Kaminski said. “Unless you estimate the recruitment rate and determine whether or not you have a sustainable population, you may not have a cost effective program.”

Kaminski is also concerned that box programs in residential areas, or recreational areas such as golf courses, leave ducklings more susceptible to prey. A study that Kaminski was involved in when he worked for Mississippi State University found that ducklings were being eaten by a “wide diversity of predators,” such as birds, fish, alligators, snakes and bullfrogs.

South Carolina is one of nine states with ongoing wood duck recruitment studies in hundreds of thousands of boxes. Six are along the East Coast from Delaware to Florida. Others are in Louisiana, Missouri and Wisconsin.

“We’re all studying this … to come up with these regional estimates of recruitment,” Kaminski said. “Everybody wants to know.”