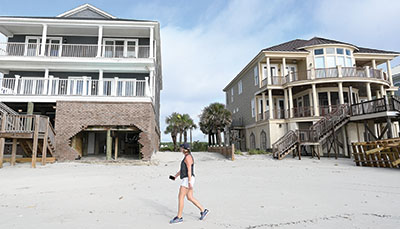 The storm surge from Hurricane Isaias in August washed through the area proposed for renourishment.

A third request for a permit to place sand on the south end of Litchfield Beach was the first to generate positive comments, but it also drew new objections from a state agency and a conservation group that say the proposal to allow work in the spring and summer will harm sea turtles.

The Peninsula Property Owners Association wants to place up to 400,000 cubic yards of offshore sand on the beach in front of 33 lots. The area is part of Inlet Point, a gated community. The Peninsula POA first applied in April for federal and state permits to place sand along portions of the beach in front of both communities. Inlet Point owners objected, many saying they didn’t want to share the cost for a project estimated to cost $12 million.

A revised permit application sought approval to bring sand by truck to the Peninsula over two or three years. That drew an outcry from Litchfield Beach property owners who were concerned about the impact of the truck traffic, estimated at 100 to 150 trips a day for three months.

The current proposal will return to an offshore borrow area as a source for sand that will be pumped to the beach by a dredge. The work, funded by the Peninsula POA, will take place around the clock for six to eight weeks.

Beach work is usually restricted by sea turtle nesting season, which runs from May through October. The POA wants to do work in the spring and summer because more contractors will be available to bid on it, said Steven Tryanum, the project manager for Coastal Science and Engineering. That will help reduce the cost.

The POA is seeking a 10-year permit to allow dredging for the replacement of sand lost to storms.

The Coastal Conservation League told regulators it has “significant concerns” about dredging during sea turtle nesting season. Its six-page objection was one of 25 comments sent to the state Office of Ocean and Coastal Resource Management, which is reviewing the application along with the Army Corps of Engineers.

The state Department of Natural Resources “strongly recommends” prohibiting the use of the dredge after March 31. If that isn’t possible, it should have reflectors and monitors to reduce the impact on turtles.

The proposed borrow area is about 3 miles northeast of Litchfield Beach.

Natural Resources also said “strong consideration” should be given to limiting work on the beach during the nesting season.

The Coastal Conservation League, which is represented by the Southern Environmental Law Project, cites federal data from 1980 to 1990 that showed 225 sea turtle deaths caused by dredging. “It is likely that this number was greatly underestimated,” it says.

And it adds, “If permitted, this proposal would establish precedent for disregarding sea turtle nesting season.”

The permit application also drew objections from some nearby property owners, some of whom said they were concerned the renourishment sand would end up adding to shoaling in Midway Creek.

It also received 15 comments in support, half from members of one family that owns a house in the Peninsula. They say the project is needed to prevent storm damage to homes.

Proponents also say that a healthy beach will reduce the washover into Midway Creek.