Driver and dog rescued from van submerged in LCC pond 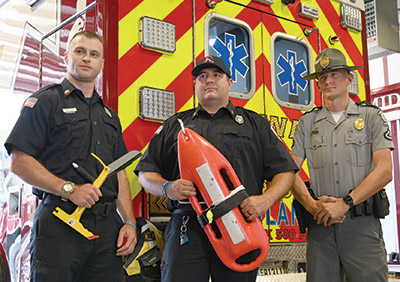 Adam Marshall swam in the state championships in each of his four years at St. James High School. He joined the Naval Sea Cadet Corps when he was 10.

A Litchfield Country Club man who drove his minivan into an entrance pond Sunday morning was lucky that Marshall, now a lance corporal with the Highway Patrol, was a mile and half away. The driver, 59, and his pit bull spent about 15 minutes floating in an air pocket of the vehicle before they were rescued by Marshall and two members of Midway Fire and Rescue – Thomas Doyle, a Firefighter II/EMT, and Steven VanKirk, a Firefighter/Paramedic.

Marshall arrived at the corner of County Club Drive and Hawthorn Drive to find two men pointing toward the pond. They had seen the Dodge Caravan roll through the stop sign at Hawthorn and into the pond. They told Marshall a man and a dog were inside.

“I just did what my natural instinct was to do,” Marshall said this week. “I dropped what gear I had; jumped straight into the pond.”

The two men followed Marshall into the water.  They said it was an SUV.

Marshall thought “if the guy’s still alive, him and the dog went into an air pocket in the hatch.”

Only a portion of the rear widow was above water. Marshall broke it with his baton.

“The whole inside of the car was already under water,” Marshall said.

He dove down to the driver’s door. It was locked, but the window was open a couple of inches and he was able to reach inside and lift the lock.

The water was 8 feet deep, at least, Marshall said. Most of the time he was treading water. His Sea Cadet training in water rescue gave him confidence. He was able to put a foot on the side of the van and pull the door open.

“Even with my eyes open, it was still murky,” he said.

He was able to touch the driver and know that he was no longer in the driver’s seat.

VanKirk emptied his pockets and untied his boots as he rode in an ambulance to the scene. He arrived just two minutes after Marshall. Doyle was right behind him on a fire engine. Bystanders were yelling that the driver was still in the van.

“Me and Steve automatically got in the water,” Doyle said. “We had kind of a general idea where he was at. So I took a tool and started busting out the windows.”

VanKirk went to the driver’s side. Doyle was on the passenger’s side. He swam into the vehicle and located the man by touch.

The driver, whose name was not released, was on the passenger’s side. VanKirk swam over the top of the van and together, the firefighters were able to maneuver the man to the driver’s side door.

“He was actually floating at the top of the car toward the rear, where the air pocket was,” VanKirk said. “That’s how he managed to stay awake and oriented as long as he did.”

The driver pushed the dog out of the van first.

“The dog came out first, swam around. We knew he was fine,” VanKirk said. “He looked quite happy.”

The man followed. He was taken the 8 to 10 feet to shore and then by ambulance to Grand Strand Regional Medical Center.

“The entire ride up there he was awake, alert, talking to us,” VanKirk said. “His vital signs were great the entire ride.”

The man was kept for observation, then released. The cause of the accident is still under investigation.

The driver would not have been able to escape from the submerged van on his own, the firefighters said. The auto glass isn’t designed to break and even in shallow water, there was pressure on the windows and doors.

“In that kind of situation, if there wasn’t anyone to call it in right away, I don’t feel as though it would have been the same outcome,” VanKirk said.

“Solid teamwork and the training we received made for a good outcome,” Doyle said.

“There’s no better working relationship in Georgetown County than we have here on the Waccamaw Neck,” said Capt. Greg Caulder, the commander of Highway Patrol Troop 5.