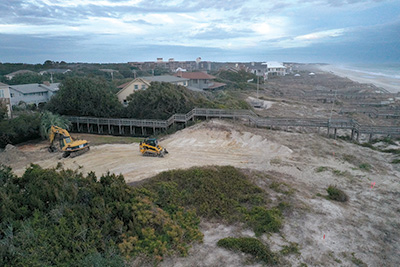 Equipment cut into a dune on the property after the Planning Commission upheld approval of the subdivision plat.

Work stopped this week on a new oceanfront lot at North Litchfield while Georgetown County officials determined whether equipment that leveled a sand dune violated the county’s dune protection ordinance.

“We had no idea they were doing this. We gave them a demolition permit. Nobody said anything about removing sand dunes,” said Boyd Johnson, the county planning director.

The property at the east end of Summertime Lane was an acre that was subdivided to create two lots. Neighbors challenged the county’s approval of a plat for the two lots, saying that deed restrictions on the property were not reported as required by law. The county is required to deny approval if there are restrictions against subdividing the lot.

The lot owners, Robert and Holly McManus of Shoestring Properties, claimed the restrictions were no longer valid and so didn’t need to be disclosed.

The Planning Commission last month upheld an appeal of the staff’s decision to approve the plat.

The county issued a demolition permit in October for a house built on the property in the 1950s. Following the commission hearing on the plat appeal, Johnson said it was unlikely the county would issue a building permit for the lots except on the advice of its attorney.

The issue is expected to go to Circuit Court.

Work on the dune, which is within the property lines of the two lots, began after the commission’s vote. It prompted calls to the county building department and the state Office of Ocean and Coastal Resource Management.

The state agency said it didn’t have jurisdiction over the dune because it is outside the “critical area,” according to Johnson.

The county’s dune protection is part of the its beachfront regulations, not the zoning ordinance. It prohibits altering  the dunes or dune vegetation without a permit.

The ordinance also prohibits driving on the dune, where a Caterpillar 257 multi-purpose tractor was at work last week.

“The ordinance doesn’t say you can’t remove sand dunes, but you do have to get a permit,” Johnson said.

A dune can be altered where there “is no feasible alternative,” according to the ordinance. If the dune is in the building footprint, portions around it have to be restored to their original contours and replanted after construction.

The only way for the county to issue a permit for dune work is to have a set of building plans, Johnson said.

The association objects to the subdivision, although it acknowledges that it has no jurisdiction. “It is in the best interest of the community and neighborhood to maintain the historical zoning and prohibit subdivision and multi-family development,” Cindy Kerr, the association president, wrote the commission.

But Wesley Bryant, the county attorney, told commission members their job was only to determine if staff followed the rules in approving the plat. It was not required to decide if the covenants apply.

The county got a statement from the former owner, who sold the property to the McManuses, that there were no covenants in effect. The staff wasn’t required to investigate that claim, Bryant said.

Toby Ward, attorney for the Salley family who are members of MAC Coastal Properties, disagreed.

“When you see an obvious and manifest falsehood like this, you should act,” he told the commission.

Dan Stacy, attorney for Shoestring Retreat, told the commission “this is not a nefarious act to put one over on Georgetown County.”

He said the restrictions were waived by the Boyles for the Salley family twice in the 1970s to allow the lots to be subdivided.

“The big issue is whether the county wants to be in the business of interpreting private covenants,” Stacy said.

Ward said the waivers for the Salley family only involved the shape of the three lots they once owned, not the number of lots.

“I hope I never have to do this again,” chairman Elizabeth Krauss said.