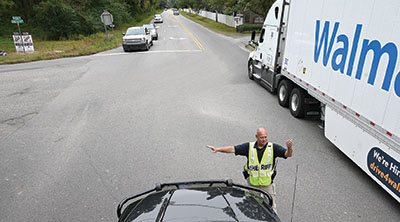 Traffic at the intersection was among the concerns cited by opponents. A deputy directs traffic that detoured around an accident on Highway 17 on Monday.

A citizens group is considering legal action after Georgetown County Council voted this week to approve a zoning change to allow 10 duplex units on property where up to six single-family homes are currently allowed. The 6-1 vote on the project known as Waverly and Kings followed pleas from area residents to deny the change because it increases residential density.

“The next step for us is to seek legal counsel to explore our options, because politics as usual in Georgetown County must stop,” the group Keep It Green said in a statement after the meeting.

The group has rallied opposition to the project since it was proposed in August with 14 townhouses in three three-story buildings on the 3.3 acres at the corner of Waverly and Kings River roads. The property is owned by Calvin Gilmore, whose home is on the opposite corner of the intersection. He put it up for sale conditioned on the buyer’s willingness to preserve the trees on the site.

Bruce Watts, who designed the project for the buyers, reduced the number of units to 10 units in five buildings and reduced the building height to a story and a half following a Planning Commission hearing in August. They will be clustered in the center of the property, leaving a 40-foot wide buffer of trees around the perimeter and 2.4 acres undisturbed. The commission deadlocked 3-3 on the rezoning. County Council remanded it for a second hearing on the revision. The commission voted 3-2 to recommend approval. Two members were absent.

Keep It Green members have argued that the change from “residential half-acre” to “flexible design district” zoning violates the county zoning code because it doesn’t show the necessary public benefit. They also say the county ordinances require the commission to have an engineered stormwater plan before it considers a zoning change.

Wesley Bryant, the deputy administrator and county attorney, said the groups have misinterpreted the ordinance. But he has proposed changing the stormwater ordinance to “provide clarity.”

“Staff believes the current practice is defensible and meets the intent of the zoning and stormwater ordinances,” Bryant said in a memo to council in advance of this week’s meeting.

Cindy Person, a leader of Keep It Green, called the project “a very nice plan.” But she said nice wasn’t the issue.

Increasing the density by four units, or 66 percent, violates the goals of the county’s future land-use plan.

“You couldn’t ask for a greater number of legitimate reasons to deny this plan,” she told the council. “Mr. Watts, if you would just provide us with the same plan with six units, we could all go home.”

Henry Westendarp, who lives at Pawleys Plantation, was a property developer in South Florida. He told the council the only reason to increase the number of units was to leverage the amount of money the buyers can borrow to develop the property.

“It’s all about the money,” he said. “It’s not about the quality of life.”

Other opponents, including hundreds who sent emails to the council and Planning Commission, cited concerns about traffic and stormwater.

“That is one of the most congested intersections,” said Mary Beth Klein, another Keep It Green leader, who said 6,000 vehicles a day use the intersection. The number increases when traffic detours around accidents blocking Highway 17, as it did for a few hours Monday morning, she added.

The county planning staff recommended approval of the project, citing the preservation of green space, the reduced building footprint and the use of a shared access rather than six potential driveways. Based on traffic engineering data, the 10 duplexes will generate the same volume of traffic as six single-family homes, Holly Richardson, the interim planning director, said, 60 trips a day.

“We’ve got the same traffic count,” Watts said. “We are actually trying to leave a natural habitat around our property.”

Council Chairman John Thomas moved to deny the request, as he did last month before it was remanded to the commission. Both times he failed to get a second. “The overriding issue is population density,” he said.

Council Member Steve Goggans, whose district includes the property, moved for approval. He got a second from Council Member Raymond Newton, who had asked Richardson to confirm the traffic impact and the requirement that additional stormwater runoff created by the project would be retained on site.

Council Members Everett Carolina, Lillie Jean Johnson and Louis Morant also asked about stormwater. The stormwater ordinance requires that the flow of water from the property remain at the same rate after development as it was before development, Richardson said.

“I see many advantages to this plan,” Goggans said. “We’re going to be very pleased with the way it turns out.”

He also told the council that although his architectural firm had worked with Gilmore on a master plan for his property in 2016, he has no role in the current proposal.

Keep It Green said in its statement that the plan “seems startlingly similar,” showing 11 duplexes with 22 units on the 3.3 acres. It also shows 19 duplexes on the property surrounding Gilmore’s current home.

Goggans said afterward that he agrees with Keep It Green that the county needs to limit density, but should do so across the Waccamaw Neck. He noted that another council vote this week changed the zoning on 5.3 acres in Murrells Inlet from residential to commercial. That change eliminated up to 20 units on quarter-acre lots. It had support from the neighbors.

“With all due respect to my friends in Keep It Green, and I do have a few, I think they picked the wrong project to hang their hat on,” Goggans said. “It sits more lightly on the landscape.”

The council also approved a site plan review for 115 multi-family units in Murrells Inlet. The 10-acre site is already zoned for that use, and while residents objected to the impact on traffic, stormwater and the character of the area, council members and staff said it met the requirements of the ordinance.