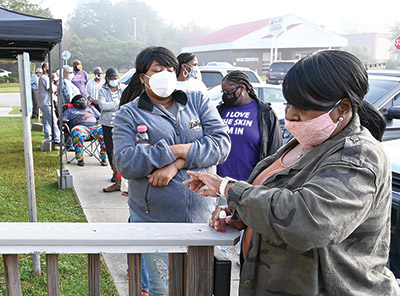 In-person absentee voting in 2020 opened with long lines outside the election office.

Waccamaw Neck residents may not have to drive to Georgetown to cast absentee ballots before the General Election in November.

County election officials are exploring the possibility of opening a voting center somewhere in Pawleys Island in October. It would be staffed by poll workers and open weekdays from 8:30 a.m. to 5 p.m. during a timeframe yet to be determined.

Aphra McCrea, director of elections, told the county’s Election Board on Jan. 12 that she is still searching for a place for the center.

The Waccamaw Library is a potential spot, but McCrea said there are concerns about adequate parking. The Waccamaw Regional Recreation Center is not available, she added.

“We would like for it to be a month because the Waccamaw Neck has grown by 43 percent,” McCrea said. “The need is there, the want is there. They’re always asking.”

McCrea expects the Waccamaw Neck center will be busy every day that it’s open.

Board member Billy Altman said the county was asked to open voting centers in 2020, but could not get the centers set up and poll workers hired and trained in time.

“I think now voting centers across the state are becoming quite popular for absentee voting,” Altman added. “There are a lot of counties that are doing it.”

The county is also considering a voting center at the recreation center in Andrews.

McCrea said if the board decides to move forward with the plan to open the centers, County Administrator Angela Christian would help make it happen. Altman called the centers “very beneficial.”

The election office in Georgetown already hires temporary staff and accepts absentee ballots before primaries and elections. Some of those temporary workers could be assigned to Pawleys Island or Andrews.

James Sanderson, chairman of the Election Board, said the centers would make it easier for people to cast ballots, and therefore might encourage more people to vote.

McCrea is also working with the school district to schedule voter registration drives at the county’s four high schools. Residents who will be 18 by the primaries in June can already register to vote.

She’s also planning to visit the Lakes at Litchfield to check residents’ registrations or register anybody who wants to vote.

Jim Dumm resigned last month, citing family and health issues. The seat will be on the ballot again in November.

Filing for the seat opens Friday and closes Jan. 31. School board elections are non-partisan.