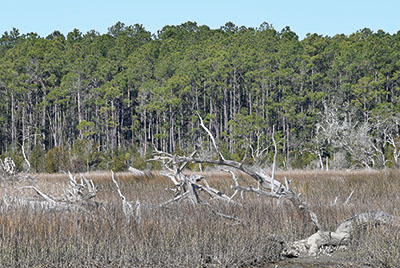 The 1,065 acres stretches from the salt marsh on Pawleys Creek to Highway 17.

The first plan for the Prince George property didn’t turn out well.

The developers who proposed nearly 3,000 dwellings, a 500-room hotel and three golf courses on 1,934 acres between the Atlantic Ocean and the Waccamaw River went bust.

The current owner has more confidence in his plan: protect 1,065 acres from future development.

A conservation easement granted to the Pee Dee Land Trust last month is the final chapter in a story that has played out over 35 years. It comes at a time when development pressure has focused attention on small parcels along the Waccamaw Neck. But people involved with the Prince George property say that the potential for development remained in spite of claims that it was protected.

Bud Watts, the sole member of PG Preservation LLC, bought 1,200 acres at Prince George from the University of South Carolina Development Foundation in 2015 for $3.94 million. He declined to comment about the easement, but a statement issued by the land trust on behalf of PG Preservation said, “it is truly a spectacular piece of property and needed to be protected permanently.”

That was the goal from the start, when Phillip Lammonds, a former owner of Prince George Sotheby’s International Real Estate, went looking for a buyer.

“When he realized that the tract could in fact be developed, he worked hard to find a conservation minded buyer. He brought us the concept of acquiring and conserving the property,” according to the statement from PG Preservation.

Watts has kept his role in Prince George low-key. The head of the USC foundation at the time of the sale said he didn’t know the buyer’s identity. Watts wanted the focus to be on the preservation effort, not on himself.

Watts made a career in finance after serving in the Air Force as a fighter pilot. He lives in Charleston and owns a beachfront house at Prince George. He also serves on the board of the Belle W. Baruch Foundation, which owns Hobcaw Barony.

“Many people that do this are low key,” said Johnny Weaver, a member of the Pee Dee Land Trust board. He lives at Waterford Heights, which is adjacent to 500 acres protected by a conservation easement created by the Havel family in 1989. The Prince George property adjoins the Havel tract.

There are tax benefits that come with granting a conservation easement. For instance, under a federal tax incentive that was made permanent in 2015, donors can apply a deduction for the value of the easement to half of their annual income over 15 years. South Carolina is among several states that allow donors to sell tax credits if they don’t owe enough tax to use the full credit, according to the Land Trust Alliance.

But those who are familiar with the process said even people with an attachment to the land and a strong desire to see it protected have to swallow hard before signing away development rights in perpetuity.

Few people have the sort of income that would maximize the tax benefit from a property like Prince George, said Dana Beach, founder of the Coastal Conservation League.

He met Watts soon after the sale in 2015 to talk about a forest restoration plan for the property. The conservation easement is part of a long tradition of protecting land on Waccamaw Neck, starting with Brookgreen Gardens, Beach said.

“There’s so little protected habitat of that type in South Carolina. We’re lucky to have so much of it in Georgetown County,” he said. “The trajectory on Wacccamaw Neck to develop anything that’s not protected.”

The recent history of Prince George is the storm of storms: tropical, financial and political.

In November 1985, Lucille V. Pate sold 1,934 acres that was part of Arcadia Plantation to the Prince George Joint Venture for $17.5 million. That’s equal to about $42 million today. The sale was financed with a $17.5 million loan from Sunbelt Savings Association in Dallas.

Sunbelt filed notice that the joint venture was in default in July 1988. A month later, federal regulators took over Sunbelt. It had assets of $2.2 billion and liabilities of $4.1 billion.

The joint venture planned to sell the property to Wild Dunes Associates, owners of the resort of the same name at the north end of the Isle of Palms. In July 1989, Georgetown County approved a plan for a development known as Arcadia II that showed 2,922 residential units and a 500-room hotel. Hurricane Hugo made landfall in September at the Isle of Palms and Wild Dunes Associates withdrew from the project.

The Federal Deposit Insurance Corp. foreclosed on the Prince George property in the spring of 1991 saying $23 million was now owed on the original loan. The joint venture tried to halt the foreclosure in a series of court actions, but the property was finally sold on the steps of the Georgetown County courthouse in October 1992 for $12 million.

The FDIC put the property up for sale to government or nonprofits. The offering was limited because a portion of the property was in the federally-protected Coastal Barrier Resources System. The state Department of Parks, Recreation and Tourism wanted the land for a state park. It only had $1.5 million to spend.

Georgetown County put together a bid with the Melrose Corp. of Hilton Head that would have provided the public with beach access and recreation facilities. Melrose planned a golf course and residential development.

The USC Development Foundation partnered with the group that had bought the undeveloped portion of DeBordieu in 1993,

, another deal with its origins in the S&L crisis. They bought the Prince George property for $10.5 million in April 1994.

During the foreclosure proceedings, Georgetown County had extended the “planned development” zoning on the property in exchange for a guarantee of public beach access. After the sale, the county said it wouldn’t approve a new plan without public access.

The revised plan submitted in October 1994 showed 150 lots on 617 acres. The USC foundation planned an environmental education center, an eco-tourism center and a hotel on 629 acres. Another 654 acres were wetlands or other protected property. There was no beach or river access.

Before the county could hold a public hearing, the foundation went to the town of Pawleys Island, which voted to annex the 1,934 acres. The town limits covered 543 acres.

A group of island residents joined Georgetown County in a suit to block the annexation. In the meantime, the town approved the new development plan.

The annexation was overturned in a town referendum in March 1997. The development plan was confirmed by Georgetown County, but with the addition of an easement for a bike path from Highway 17 to Pawleys Creek.

The sale of lots had already started. Those on the oceanfront went for $650,000.

The USC foundation continued to develop plans for environmental education facilities, but those were eventually shelved. The Great Recession diminished the value of the property and put a strain on the university’s finances. Yet the foundation also found the property was hard to sell.

“We wanted to do the right thing for the university and for the residents of that area and for the environment,” Russ Meekins, director of the foundation, said in 2015. He died in 2017.

The foundation could have pushed harder to sell the property, Beach said. He credits Meekins for helping to protect it.

“They never really had it under conservation easement or anything,” said Nancy Cave, who was director of the North Coast office of the Coastal Conservation League for 15 years. “They were just looking for the money.”

The league staff met with the USC foundation several times to talk about the future of the property, Cave said.

“Most people wrongly assumed that the conservation easement placed on the property in 1994 protected the property,” said Lyles Cooper Lyles, executive director of the Pee Dee Land Trust.

It only applied to the wetlands, which already had protection under federal law.

“It did not protect the vast majority of the high ground where development could have occurred,” Lyles said.

The USC foundation had an appraisal that put the value of the tract at $70 million if developed like the adjoining portion of Prince George. Although the foundation considered that high, it was before the arrival of national homebuilders in the market.

“We were really concerned about it. It would be a beautiful property to develop,” Cave said.

The tract stretches over two and a half miles from Highway 17 to Pawleys Creek.

There is 2,200 feet of highway frontage and over 6,500 feet of creekfront. Driving down Springs Avenue on the south end of Pawleys Island, all the property west of the creek as far as Pawleys Inlet is protected by the easement.

Along with the saltwater estuary, the property includes maritime forest, stands of longleaf pine and hardwood swamps. The land trust worked with the U.S. Fish and Wildlife Service to identify more than a dozen rare or at-risk species on the property.

The conservation easement limits construction on the Prince George property to eight homes and outbuildings on four parcels. There are also two parcels set aside for agricultural buildings. The easement also allows forestry, but no commercial uses. It allows a nonprofit to use the property for research and education, with any structures limited to the designated building areas.

What most people will see at Prince George in the future is what they see today. One of the residential parcels is at the edge of the high ground behind the salt marsh on Pawleys Creek. A 100-foot-wide buffer will be maintained along Highway 17.

Among the flaws seen in the restrictions placed on the property in 1994 was that they could be lifted by mutual agreement of the owner and PRT. That was done in December, when the conservation easement was recorded.

The easement can be lifted, but it requires action by “a court of competent jurisdiction.” Depending on the value of the easement at the time, the Pee Dee Land Trust could be entitled to all the proceeds if the property is sold.