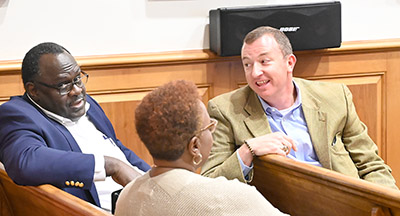 Tucker, right, and Ray Funnye were candidates for county administrator in 2019.

A new firm is coming to the Andrews industrial park with a $15 million investment and 34 jobs. That’s only the start.

“The next five years in Georgetown will be the best five years Georgetown has ever seen in economic development,” said Brian Tucker, the director of Economic Development for the last seven and a half years.

He will be watching from a distance.

“For all the potential I see in Georgetown County, there’s more in Myrtle Beach,” he said.

Tucker will have responsibility for the city’s economic development, planning and zoning, and public works. That will include implementing the downtown master plan the city adopted in 2019.

“That’s the part that really intrigues me,” he said.

Tucker came to Georgetown County in 2012 to take over as president and CEO of the Chamber of Commerce. He had held the same position in North Augusta and worked in mortgage lending. He became the director of Economic Development the next year.

“Economic development is about the creation of wealth. You create it by giving people good jobs,” he said after being named to the position. “It’s just a matter of perseverance and maybe some Pollyanna thoughts.”

Among the projects Tucker undertook in Georgetown County was the creation of a new industrial park on 948 acres of former timber company property on the Sampit River. The Pennyroyal Industrial Park has rail, road and barge access. Last year, the first prospect took an option on 50 acres.

The pandemic caused companies to reassess their supply chains, and the county was in a good position to attract firms that wanted to diversify, he said.

“We’ve set the dominoes in place. They are just starting to tip,” Tucker said. “The worst thing that could happen would be: the dominoes still be standing a year from now.”

Tucker has also worked on a housing needs assessment, citing the shortage of workforce housing that hinders economic growth. He has worked with the city of Georgetown to help expand commercial and retail development beyond the Waccamaw Neck.

Tucker was one of three finalists for the position of county administrator after Sel Hemingway announced his retirement in 2019.  His decision to apply was the result of his experience in the administration office.

“It’s a realization that everything’s tied together,” Tucker said.  “If you really want to affect change, you need to have a seat at all those tables.”

That’s what made the Myrtle Beach job appealing.

“They’ve really committed to everything that we’ve been trying to push for in Georgetown,” Tucker said. “They are a couple of steps ahead.”

The city was ranked first on the list of Fastest Growing Places by U.S. News & World Report this year. It is second to Spartanburg on the list of Best Places to Live in the state.

Despite the view that some Waccamaw Neck residents have of the city, “we can’t ignore the fact that close to 20 million people a year go there for vacations,” Tucker said. “It’s an interesting opportunity.”