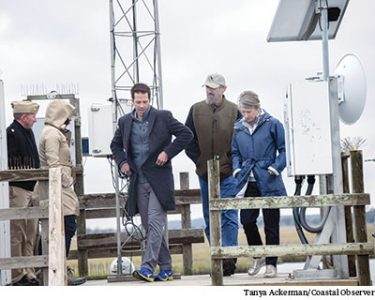 Education is the key to dealing with a changing climate, according to the head of the federal agency responsible for coastal science. “I think the top-down solution ultimately starts with the bottom-up solution in the education process,” said Neil Jacobs, acting administrator of NOAA.

And that includes the University of South Carolina’s Baruch Institute for Marine and Coastal Scientists, where Jacobs was once a student and was among the speakers on hand to mark the institute’s 50th anniversary over the weekend. “I am definitely a friend of Baruch,” where NOAA funds the North Inlet-Winyah Bay National Estuarine Research Reserve, he said.

The reserve, one of 39 in the country, is headquartered with the institute’s field lab on Hobcaw Barony. “It’s the site I basically grew up on,” Jacobs said, calling it “a living laboratory to study the effects of both the natural causes and human-induced causes on the environment.”

Jacobs became assistant secretary of commerce for environmental observation and prediction last year. This year he was named acting administrator of the National Oceanic and Atmospheric Administration.

He earned a bachelor’s degree in physics and math at USC, but had a minor in marine biology. He earned a doctorate in atmospheric science at N.C. State.

“My true passion is surfing,” Jacobs said. “I realized real quick that if I wanted to figure out when the waves were going to be good I had to understand air-sea interaction, ocean swells. It’s really just applied math.”

He did research at the Baruch Marine Lab from 1992 through 1994 as an undergraduate.

“There are not a lot of universities that have that kind of research experience at the undergraduate level. I can’t tell you how critical that is,” Jacobs said.

While the institute acquired an international reputation over five decades, equally important is its collection of data that is approaching 40 years, said Dennis Allen, who retired this year after 40 years as director of the lab.

“Sea level’s come up about 4 inches in the last 40 years. Creeks are widening. Large areas of marsh are more sparsely vegetated. Tides are encroaching into the uplands more frequently and further,” Allen said.

Rising water temperature is affecting marine life. They are less abundant in North Inlet and, Allen said, “we’re also seeing these decreases in our commercial fisheries.”

The data collected at the Baruch Institute needs to be put to use, Allen said.

“In general, I can’t give advice to others, but I try to live a life of lowest impact on the environment that I can,” he said. “Other than that, be engaged, try to stay up to date on the science and support the ongoing research and education, whether it’s K through 12 or undergrad. Learning how to understand and mitigate these things all starts with education,” he said.

Jacobs said he has been surprised by the way science has become politicized.

“I always thought if you follow the scientific method and everything is objective and transparent, the results are what they are. That’s still the way it should be,” he said.

Jacobs was caught up in a political storm after a tweet by President Trump about Hurricane Dorian’s threat to Alabama was refuted by the local National Weather Service Office. He was criticized when NOAA issued a correction.

Jacobs said it was over-blown. “The scientists in NOAA, they’re professional and doing their jobs,” he said.

The story behind Dorian, he said, was the accuracy of the prediction, which followed an upgrade to modeling software in place since 1982.

“The fascinating thing about the Dorian forecast was the U.S. model actually predicted the swing up the coast,” Jacobs said. “The U.S. guidance model did phenomenal this year.”