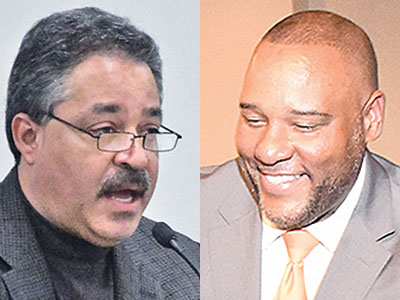 According to Superintendent Randy Dozier,  the district is not through shifting people around yet. A handful of principals are ready for additional responsibilities, Dozier said, which means several assistant principals could be promoted to principal,

Weeks after suspending the search for a new deputy superintendent to replace Celeste Pringle, who is retiring, the district named two interim assistant superintendents.

Jon Tester was promoted from executive director of human resources to interim assistant superintendent for school and support services. Tester, who is the former principal of Waccamaw Elementary School, will be in charge of general administration, the Howard Optional Placement Program, the Howard Adult Center, guidance counselors, ESOL teachers, and media and career specialists.

Doug Jenkins, who was director of human resources, was promoted to replace Tester as executive director. Jenkins’ former job went to Chelice Waites.

Like Milton, Genia Smith, who was director of federal and state programs, is now the executive director.

The district also removed “assistant” from Lonnie Stuckey’s title. He is now director for safety and risk management. Alan Walters remains executive director of that department.

The hiring of Giles was approved by the school board this week. Dozier said the other changes were administrative transfers or change of titles and did not need board approval.

Earlier this month, the board approved the hiring of Mike Johnson Jr. to the newly-created position of coordinator of athletic facilities. He is the son of district finance director Lisa Johnson and retired Georgetown High baseball coach Mike Johnson.

Replacements for Evans and Giles will be named at a special school board meeting on July 9 at 5 p.m. in the Beck Center.

“It’s a big deal in a small community. It’s a big decision,” Dozier said. “Naming a principal is probably the most important thing I do.”

Candidates for the two jobs are being interviewed this week. The process has a sense of urgency since the district is closed next week for the July Fourth holiday.

The new budget includes $1.77 million to cover a 4 percent increase for teachers’ salaries and fringe benefits and an increase starting pay for a new teacher. Some teachers will get bigger raises if they are due for step increases. The district is one year behind in step raises after freezing pay during the recession.

No other local government meetings are scheduled at this time. , .