Father campaigns to get Down syndrome in Phase 1a – Coastal Observer

Father campaigns to get Down syndrome in Phase 1a 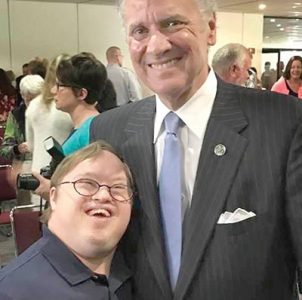 Last month, Ken Leach drove from his home in Heritage Plantation to Charleston so he and his wife and son could get the COVID-19 vaccination.

Leach read all the instructions on the Medical University of South Carolina website before making the appointments. He thought that Corey, who is 41, qualified because he has Down syndrome, and they qualified because they are Corey’s caregivers.

The family was turned away.

“The woman behind the counter at MUSC seemed more inclined to turn people away than give out vaccines,” Leach said. “He has to be under 16, he has to be on a ventilator and a bunch of other stuff that wasn’t anywhere on their website.”

It turns out the information on the MUSC website about people with disabilities getting vaccinated was incorrect, Leach said. (MUSC disputes that, according to a spokeswoman.)

The experience angered Leach, and that anger is fueling his advocacy.

“They are truly our most vulnerable,” Leach said.

Leach sent an email to Dr. Patrick Cawley, the chief executive officer of MUSC, asking that people with Down syndrome get the vaccine.

Cole told Leach that MUSC has to follow the guidelines set by the state Department of Health and Environmental Control or risk having their supply of the vaccine cutoff.

Even though the Centers for Disease Control and Prevention recommends that people with Down syndrome be included in the first phase of a vaccination rollout, DHEC includes them in Phase 1c.

Leach estimates that there are around 2,500 people with Down syndrome in the state.

“Vaccinating those 2,500 Down people would save as many hospitalizations and deaths as vaccinating 25,000 other people regardless of age,” Leach said.

Leach emailed Gov. Henry McMaster for help three times, and included a picture of the governor with Corey. Leach wrote, “you probably don’t remember Corey but you can do something.”

He never heard back.

Leach then emailed Sen. Lindsey Graham, asking him to “influence his friends in “South Carolina.” He received a form letter with a link to Graham’s website to make a donation.

“My feeling is some people in power just don’t value handicapped people’s lives as much as they do their own,” Leach said. “That’s why they’re being overlooked.”

Leach was angered recently when he saw a picture on Facebook of Dr. Edward Simmer, director DHEC, who is in his mid-50s, getting vaccinated.

“They either know or they don’t care,” Leach said. “Once they know the only answer is they don’t care and they don’t do something about it because it’s not that big a deal in terms of the impact. One delivery of the Pfizer vaccine would vaccinate every Down person in the state.”

Since mid-December, more than one million vaccine doses have been administered in the state.

The state received nearly 100,000 doses this week, its largest amount ever, and will surpass that amount by 8,000 doses next week.

The federal government is expected to approve a third vaccine from Johnson & Johnson within a few weeks. The new vaccine requires only one dose instead of two like the Pfizer and Moderna vaccines.

On Wednesday, Dr. Linda Bell, state epidemiologist, said the state will transition into Phase 1b when the number of vaccination appointments for people in Phase 1a begins to decrease.

Bell also said it is possible that DHEC could shift people from Phase 1c into 1b if the number of people in Phase 1a  who want to get vaccinated is less than expected.

Correction: This article was updated from the print edition. Leach contacted Dr. Patrick Cawley, the chief executive officer at MUSC, not Dr. David Cole, the president of MUSC.