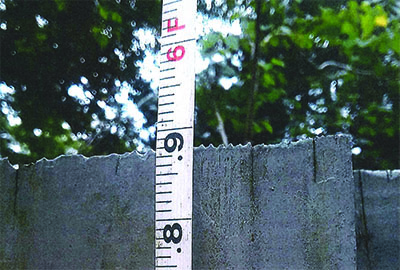 Fears that portions of a proposed fence at a home on Murrells Inlet would become storm debris prompted neighbors to oppose the owner’s request to allow a structure 2 feet higher than the county allows.

Members of the Georgetown County Board of Zoning Appeals last week denied the request from Terry and Sarah Burdick to replace what they said was an 8-foot-high fence destroyed by Hurricane Matthew in 2016. The Burdick lot on Waterside Lane is bordered by Business 17 and the Marina Colony yacht basin.

The Burdicks, who bought the property in August 2017, said the taller fence was needed to buffer their property from noise from traffic and the marina and to screen it from a sewer lift station.

“The fence was there three or four years before Matthew came through,” said Marvin Heyd, a former member of Horry County Council and a current member of its planning commission. He represented the Burdicks at the appeals board hearing. Neither the couple nor their neighbors attended.

In letters to the appeals board, neighbors cast doubt on the height of the former fence. Dale

Grinolds, the property manager for Marina Colony, said he has lived there since 1995. “There has not been an 8-foot fence in that time,” he wrote on behalf of the 32 owners of the condos. “Our primary reasons for our opposition are that we are in a wind zone and obstruction of our view of the inlet.”

Grinolds also pointed out that the Burdick property used to have a landscaped buffer.

“Most of the shoreline was covered in vegetation and dense trees facing the marina,” Adam and Jennifer O’Neill, who live on Waterside Lane, said in a letter to the board. “These trees were removed when the Burdicks constructed a seawall earlier in 2018.”

The O’Neills also told the board the previous fence was not 8 feet high. County zoning officials said the remaining portion of the fence is 5-foot-9.

Donald Godwin, who lives in the Hermitage neighborhood on the south side of the marina access channel, told the board in a letter that he “spent a lot of time and money over the years acquiring my privacy with landscape material and foliage.”

He wanted to know more details about the look and construction of the proposed fence, saying “it could be a very dangerous object in a high wind situation,” Godwin wrote.

Grinolds said his community was also concerned about “flying projectiles.”

The Burdicks got support for their project from another neighbor, David Michaux. They “really need a 12-foot high fence for they are on Business Highway 17 where all the cars and bikers pass by at all hours of the day and night,” he wrote.

Michaux has lived at his home for over 82 years. “We are not right on the highway per se, but the noise from all the bikes at 2 a.m. and on keeps us awake,” he added.

Tim Onions, who chairs the appeals board, questioned Heyd about the height of the fence. “I’m 6-2,” he told the board. “I assure you that it was 8 feet. I would not come before you if it was only 6 feet.”

He admitted there were no photos, but he said there are other 8-foot fences in Murrells Inlet, something he said he knows from 38 years selling real estate.

Heyd also told the board that the Burdicks don’t want to put an 8-foot fence around the entire lot. They only want it on the sides with the marina and street.

Board member Will Moody pointed out that part of the remaining fence is outside the front yard setback and any replacement would have to be moved. Gareth Bonds asked how the county could limit the length of the taller fence.

“It’s not just about one piece of property,” Onions said. “Even if it was 8 feet, it came down and it has to conform.”

State law requires applicants satisfy four criteria for a variance: there are extraordinary conditions; those conditions don’t apply in the vicinity; the ordinance unreasonably restricts the use of the property; and that a variance won’t harm the public good.

Onions said he didn’t think the Burdicks met all the criteria and moved to deny. The vote was 4-0.