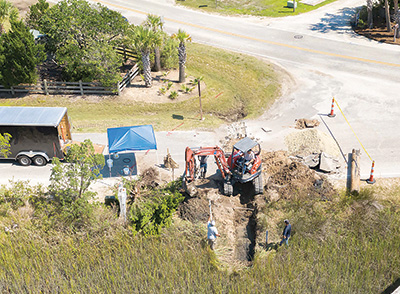 Pawleys Island expects to use its money for storm water projects.

Local governments are making plans for spending their share of the $1.9 trillion from the federal American Rescue Plan. That ranges from $12 million for Georgetown County to $53,000 for the town of Pawleys Island.

The money can be used to pay public sector workers who provided essential services during the pandemic or to offset the pandemic’s impact on communities. It can also be used on infrastructure.

Council Council approved a spending proposal this month for $2.1 million of capital projects. County departments were asked to submit projects, which were then reviewed by Administrator Angela Christian and senior staff.

“Infrastructure-related items  would be the primary category,” said Jackie Broach, the county public information officer. “We could probably spend every penny of available funding on that and still have projects remaining.”

The single biggest expense in the list approved by council is $500,000 for an HVAC system at the Georgetown Library, which is due for an expansion and renovation project.

Another $400,000 is earmarked for economic development, but no projects are identified. The county is waiting to see what projects would comply with an ever-evolving set of federal rules for spending the money, Broach said.

Fire districts will get $350,000 for new Lifepak heart monitors and defibrillators.

Council Member Bob Anderson proposed delaying a vote on the spending plan until the council could discuss it in a workshop. That idea failed on a 4-2 vote.

The city of Georgetown will receive more than $4.35 million over two years. The City Council is still discussing how to spend it.

Yúdice said priority was given to water or sewer systems with the oldest equipment and those with high repair costs. City employees who work on those systems were consulted, she added.

Yúdice said separating the money equally might mean there wouldn’t be enough to pay for all the projects in some areas.

“The West End needs a lot more than sewer work,” Humes said. “Whatever we can get done, we get done.”

Council Member Al Joseph said council should rely on the input from the experts who work on the systems to decide which are the most critical, which is how the projects ended up in Yúdice’s proposal.

Barber asked each council member to meet with Yúdice individually before the next council meeting to go over the project list.

“Let’s use that procedure we use with our budget,” Barber said.

Like the county, the city is also uncertain about how to allocate funds for economic development.

The city’s plan includes $200,000 for economic development grants for businesses.

Yúdice said the money would likely be awarded for pandemic prevention items like personal protective equipment and upgrading HVAC systems.

She cautioned the council members that if the grants are used incorrectly the city will have to pay the money back.

“We are the police in that situation,” Council Member Jonathan Angner said.

Joseph suggested getting input from the Georgetown Innovation Center, a nonprofit business incubator, on who should get grants. If there’s no oversight then the city should use the $200,000 somewhere else, he added.

Council Member Carol Jayroe asked who was going to investigate whether a business has a license or was even operating during the pandemic.

“I think we are opening up a can of worms with this,” Jayroe said. “There’s other places that $200,000 can go to help honest businesses in Georgetown.”

The City Council scrapped a proposal to spend $200,000 to provide wi-fi access at city parks and spread the money among several projects.

The County Council approved $300,000 to provide broadband service in the rural Rose Hill section. It was an area that has fallen through the cracks in other internet projects, Broach said.

“The key is to look for transformative projects,” Christian said.

The county has not yet allocated all of its funds. Christian told council this month that she only recently learned that some road projects could qualify.

“The rules keep changing and the devil is in the details,” she said.

The town of Pawleys Island has no plan yet for spending the funds. Town Administrator Ryan Fabbri said it’s likely the money will go to a stormwater project, since the town has a limited number of infrastucture options that can be met with $53,000.

The money can also be used to help fill revenue gaps created by the pandemic, but the town saw its revenue rise because its single biggest source is a tax on short-term rentals.

The federal funds are awarded to local government based on population. They have until Dec. 31, 2024 to decide how to spend the money. The money must be spent by Dec. 31, 2026.