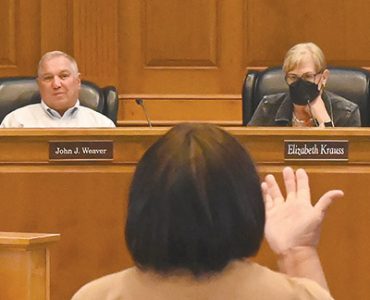 Elizabeth Krauss and Johnny Weaver were both accused of having conflicts of interest.

The figure dressed in black and carrying a scythe was only the start.

A timer drowned out speakers who exceeded their three minutes of public comment. Catcalls and  false accusations led the chairman to hand over the gavel. And after the Georgetown County Planning Commission voted to recommend denial of a rezoning for a townhouse development, one of the members received a rebuke from her colleague.

The figure of the grim reaper stood outside the entrance to the county courthouse as residents filed in for a public hearing last week on a request by the county Economic Development Alliance to amend the zoning of 14.5 acres on Petigru Drive to allow 90 townhouses in place of a planned technology park. A request a year ago to allow 182 apartments in the “planned development” zoning district was turned down by the commission. The request was withdrawn before it reached County Council.

Common to both requests is an offer to include affordable housing in the mix.

“We are committed to making 20 percent of them more affordable than market rent,” said Dan Stacy, the attorney representing the alliance.

The prospective buyer was not named.

“Who is the real, unnamed applicant behind this?” asked Duane Draper, who chairs the citizens group Keep It Green. He told the commission he believes it is Graycliff Capital Partners, who made the offer to buy the property in 2021. Graycliff developed Litchfield Oaks and the Waterleaf complex in Murrells Inlet. A call to the company seeking comment was not returned this week.

Stacy said the project, which will be rental units, helps meet the shortage identified in a housing needs assessment last year and included in the county’s comprehensive plan this year.

The housing study showed a need for rental units under $1,000 a month and houses under $125,000 for service and public sector employees.

Mary Beth Klein told the commission the townhouse project won’t fill that need.  “These are high-density, luxury apartments,” she said.

“Rentals is not really our idea of lifting people up and allowing people to enjoy the same thing that most of us have, and that’s housing ownership,” said Lynne Ford, who lives in the Parkersville community. “Twenty percent is really not acceptable. That’s just a few bones to us, and that’s really insulting.”

She and her husband, the Rev. Johnny Ford, created the Parkersville Planning and Development Alliance. They proposed that County Council donate the tech park property to Habitat for Humanity.

“These apartments are not going to be truly affordable to people that truly need that type of housing,” Larry Snyder told the commission.

Deborah Greggs, who has lived in the area since 1959, and Ruth Thomas, a resident since 1974, talked about growing problems with stormwater and traffic. Marty Green, who lives behind the property, said she and her neighbors are also worried about flooding.

Elizabeth Krauss, who chairs the commission, told the audience that a bathroom in the courthouse was trashed and feces smeared on the wall following hearings last month. She said an employee was also harassed.

(Holly Richardson, the planning director, said later it was a member of the building department.)

So Krauss said she was going to keep strict time on public comments.

Marty Farrell got in under the wire talking about flaws he saw in the traffic study for the property. As the timer chimed, he asked Krauss “as a county employee, shouldn’t you recuse yourself?”

“I’m not a county employee. I don’t know where you get that,” Krauss said.

Krauss is director of the Georgetown County Board of Disabilities and Special Needs, a state agency.

Commission member Marla Hamby later noted that the county board owns two group homes that are adjacent to the tech park property.

“Chairman Krauss has given me some doubt as whether it’s the county or the state that owns them,” she said.  “They don’t want to speak at this meeting because the people that work there think they’re going to get fired if they went against Ms. Krauss.”

“That is so out of line,” Krauss said. “The individuals that live there are severely disabled. They cannot come speak at this meeting. So do not bring them into this debate at all, ever.”

Krauss then gathered her papers and turned the gavel over to Johnny Weaver, the vice chairman.

Hamby then asked Weaver about his connection with the real estate agent she said brought the offer to the county.

Weaver said he didn’t know who made the offer, but said “I won’t vote if it will get you to a point where we can move on.”

“I’m trying to make a point for the community,” Hamby said.

Sandra Bundy moved to recommend County Council deny the request, “because it doesn’t comply with the comprehensive plan.”

The vote was 5-1, with Weaver opposed.

Commission member Robert Davis  then admonished Hamby. “I think it was very disrespectful,” he said.

“Our assignment here is to make sure we follow what is written,” Davis added. Not to attack individuals.”