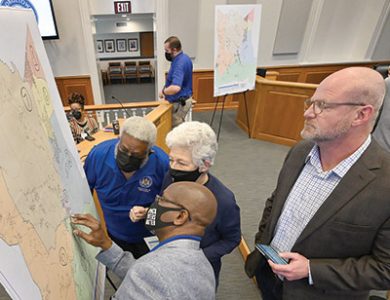 Shifting two neighborhoods in Georgetown lifted clouds of doubt from a plan to redraw County Council districts for the next decade.

The council gave final approval this week to a map that places three of the seven districts entirely on Waccamaw Neck – with one of those entirely in Murrells Inlet – and preserve three “majority minority” districts in the western part of the county.

The plan also keeps the West End of Georgetown intact within Council District 4, a concern raised at public meetings.

“I think it’s a good day,” said Donald Gilliard, a Georgetown resident, after the final map was presented. “It really, really warms my heart.”

County Council is required by law to redraw its election districts after every federal census so that each council member represents the same number of people.

Since the last redistricting, shifts in the county population mean that Steven Goggans in District 6 represented nearly 11,000 people while Everett Carolina in District 3 represented just under 7,800.

The target population for each district is 9,058,  plus or minus 5 percent.

The process was delayed almost a year because the coronavirus pandemic interrupted the 2020 Census. The council received the census data last fall and needed to adopt its new maps before filing for candidates opens next month.

There will be elections in Districts 1, 6 and 7 this year.

The county contracted with the state Office of Revenue and Fiscal Affairs to produce an initial redistricting plan. Those maps were rejected by the council.

Among the concerns was the proposed shift of DeBordieu from Council District 2 on the Wacccamaw Neck into District 4 with the city of Georgetown.

The maps also kept Goggans and Council Member John Thomas in their current districts even though both said they didn’t plan to seek re-election. Thomas, who represents District 1, lives in North Litchfield. Leaving him out meant that District 1 could be drawn within Murrells Inlet.

The local chapter of the NAACP, which had developed its own council district maps, said the revised plan violated the Voting Rights Act by diminishing the ability of minority voters to elect a candidate of their choice.

The chapter said its proposed maps showed it was possible to maintain Black majorities in Districts 3, 4 and 7.

The council and county staff came up with a second revision that increased the Black population in District 4 to 42.3 percent.

It still split the West End of Georgetown between Districts 3 and 4.

Residents said the second revision was an improvement, but still not good enough.

The NAACP and the state chapter of the ACLU told the county in a letter last week that the revised map would still be subject to a challenge in Federal District Court under the Voting Rights Act.

Although Blacks make up 28 percent of the county population – equal to two  sevenths – the county still needed to maintain the three Black majority districts to comply with the law, said Adair Boroughs, attorney for the ACLU.

“The NAACP maps show it’s clearly possible,” she said. “If it falls below the level where it’s impossible to have compact districts, that’s different.”

Boroughs also pointed out that an analysis of voting trends in the county show that voting remains racially polarized.

While there are some places where it is possible to have effective minority representation with less than 50 percent minority population, Boroughs said, “Georgetown does not appear to be one of those.”

“We have tried so many different combinations. I really think this is probably the one that best reflects across the board, not just those three districts, but all seven districts,” she said. “I certainly wish that we could make everybody happy.”

“We have a new beginning,” Neal added.

The only criticism heard before the council vote was about the process.

“I know you’ve heard our voices,” said Marilyn Hemingway, founder and CEO of the Gullah-Geechee Chamber of Commerce. “However, it must be said as we move forward that when you were elected you may have been elected in single-member districts, but you took an oath to the whole county.”

She was one of several people who noted that only the three Black members of council attended a public meeting in Georgetown last week on the second revised district map.

Jonathan Angner, a Georgetown City Council member, echoed Hemingway’s comment about serving the entire county. He said the County Council did that.

“This is the best map. It’s not perfect, but you’re darn close to it,” he said.

Council Member Raymond Newton, whose District 5 covers the northwest portion of the county, said the council didn’t expect its early drafts would make it through to final approval.

“Our goal was to try to even the playing field as much as we could with the decrease in population that we had,” he said, referring to the Black population.

“If you had to ask me what’s the map that I think most closely reflects the concerns of what we’ve heard for the past month an a half, I certainly have to say that it is Map 650,” Christian said.