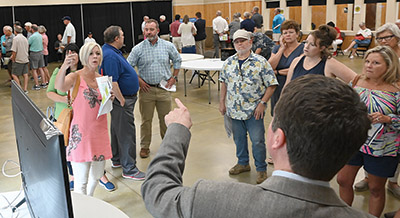 The chance to comment on $53.3 million in proposed improvements to Highway 17 along the Waccamaw Neck drew more than 120 people to a forum this week.

It was the best turnout so far for an update to the traffic study that has guided land planning and improvements along the highway since 2003.

“There was interest,” said Mark Hoeweler, executive director of the Grand Strand Area Transportation Study, the intergovernmental group that funded the $100,000 update. “It was worthwhile.”

Whether the comments affect the results reached by the engineering firm AECOM, which started work on the update in 2019, remains to be seen. Participants got a handout with a summary of the proposed improvements and were able to watch video renderings of the key sections of the highway in Pawleys Island, Litchfield and Murrells Inlet. They could then fill out comment forms.

The forms ran out halfway through the session and had to be restocked.

“We’ll look them over and consider if we need to revise the plan,” Hoeweler said.

The session with staff from AECOM and local planners added about $8,700 to the cost of the study. That was paid for by Georgetown County, which requested the update.

If there are revisions to the study, GSATS will fund those, Hoeweler said.

For Tom Martin, who moved to North Litchfield last year, it was the first chance to provide input on the plan.

“I’d like to see some of these projects go faster,” he said.

Martin said he would have preferred a format the provided a presentation about the overall study.

Goldfinch proposed an overpass, which Hoeweler estimated would cost $42 million.

“I’ll get the money for the overpass if there’s a groundswell of support for it,” Goldfinch said.

But he hadn’t talked to Leon Rice, a leader of Preserve Murrells Inlet.

The loop won’t work, Rice said, but the overpass “is too urban” for Murrells Inlet.

“It’s unsolvable,” he said, before adding that the solution is to reduce the density of development and preserve more green space.

He still thought the public involvement was a benefit.

Drew Street said he was interested in learning more about the roundabout proposed near his house on Kings River Road. He wasn’t sure it was necessary.

Neither were Russell and Jordan Watkins, who live nearby.

“It’s hard to get information,” Russell Watkins said, which is why they came to the meeting.