Final version of design rules calls for town review board 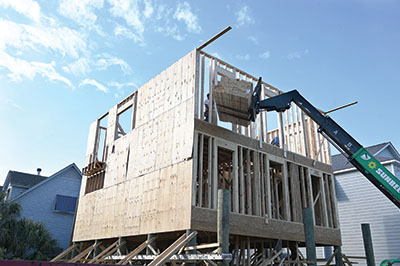 Under the new rules, second floors must be 20 percent smaller that first floors.

A proposal to preserve the traditional look of houses on Pawleys Island will follow a traditional approach: an architectural review board.

Pawleys Island Town Council is due to take up the latest version of the plan May 17. It follows months of debate by the town Planning Commission that saw a list of design mandates whittled down from six to four to one.

Along with an ordinance creating the ARB and a set of guidelines, the Planning Commission voted last week to recommend that the town amend its zoning ordinance to limit the size of a house’s second floor to no more than 80 percent of the space on its first floor.

Council and commission members agreed at a workshop in March to bring the proposal to the council for the first of two required readings in May. In addition to the limit on second floor space, the commission also recommended the town adopt a steeper roof pitch, prohibit “stacked” porches and ban vinyl, aluminum and faux stucco siding.

It also proposed that the town hire an architect to review and approve plans, with the commission acting as an appeals board.

“We really couldn’t do that,” commission chairman John Hildreth said.

Last week, the commission agreed on a revised proposal that calls for a five-member ARB to review and approve plans based on guidelines that define “the Pawleys Island Look.” Only the second floor size limit will be made part of the ordinance. Other design elements will be part of the recommendations included in the guidelines.

The town already limits construction, but has always stopped short of architectural review. The roof of a house must have a 7/12 pitch. Houses can have no more than 4,000 square feet of heated space and cannot cover more than 40 percent of a lot’s area.

Commission members and Mayor Brian Henry say the ARB is intended to do away with “boxy” houses.

After the March workshop, Henry created a video to explain the proposal. He said most of the 15 or so comments were favorable. Those who were opposed cited concerns about being locked into one style of house and the “big brother” effect for an island that has tried to keep government low key.

“All we want is another level of rigor,” Henry said. But he added that the intent is to “make it flexible.”

“I think flexibility is the key,” Administrator Ryan Fabbri said.

The five-member review board is required to approve “all new developments proposed within the town,” according to the proposed ordinance. Applicants are required to have a licensed architect and to meet with the administrator for a pre-design conference.

Fabbri said he could only recall one instance where someone building a new house didn’t contact him before applying for a permit.

The application to the ARB must include design drawings for all buildings, photos of the site and adjacent properties, and specifications for the building materials.

In addition to approving or denying an application, it can grant conditional approval.

The proposed ordinance also lets the ARB grant exceptions to the design standards provided the project “will adhere to the traditional ‘Pawleys Island’ design.” Like the granting of a variance to other aspects of the zoning ordinance, the exceptions will take into account the unusual conditions that apply to the parcel and whether adhering to the standards would create “an unnecessary hardship.”

Fabbri said that will help balance the design standards with the current language of the zoning ordinance that allows owners to build a house with at least 2,000 square feet of living space.

“If you can design for the Pawleys look, we’ll consider it,” commission member Buddy Keller said.

“While a house with the Pawleys Island Look can take many forms and contain a variety of architectural design elements,” the guidelines state, it will “always blend naturally with its environment and setting, and will contribute to the overall ambiance of the island.”

They also cite five characteristics of house with that look:

Although the final proposal cut back on the number of mandates, “I think people will take the recommendations into consideration,” commission member John LeMaster said.

He will serve as a non-voting member of the ARB. Commission member Ken Leach will leave the commission for a seat on the ARB. Three other property owners have agreed to serve if the council approves the measure, Henry said.

He would like the council to invoke the pending ordinance doctrine on first reading. Although a public hearing and a second reading would be required, the town would be able to enforce the standards for new projects.

“We’re trying to do something better than we’re doing now,” Henry said.