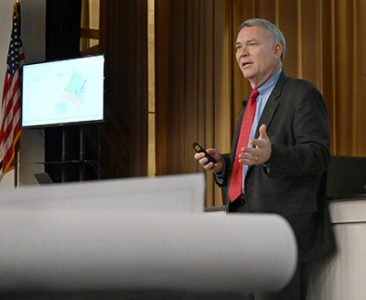 Two proposed changes to Georgetown County Council districts shifts voters in DeBordieu into a district centered on the city of Georgetown.

Council Member Bob Anderson, who represents those voters now, hopes to get them back before the new districts are made final next month.

“People in DeBordieu don’t want to be in District 4,” he said. “We’re working on that.”

The seven council districts are being redrawn following the 2020 Census to maintain the constitutional requirement of one-person, one-vote. Since the current districts were implemented in 2011, the population on Waccamaw Neck grew while other areas of the county shrank.

The goal of the redistricting is to have 9,058 people in each district, with no more than a 10 percent difference between populations of the largest and smallest districts. That difference is now more than 36 percent.

Race is another factor.

The federal Voting Rights Act protects the interests of minorities, but the Black population of the county has also declined. It is now 29 percent of the total, equal to two of the seven council districts. There are currently three Black members of council.

The county contracted with the state Office of Revenue and Fiscal Affairs to help with the redistricting. The agency provided two draft plans last week.

The first maintains a majority of Black voters only in District 7, represented by Council Chairman Louis Morant. The majority is just over 51 percent of the voting-age population.

District 4 and District 3, represented by Everett Carolina, would have “majority influential” Black population, according to a memo from Fiscal Affairs.

The second redistricting plan keeps the voting-age population of Districts 3, 4 and 7 are just over 50 percent. In both scenarios, DeBordieu is in District 4.

Both proposals also keep North Litchfield in Council District 1. That’s where the current council member, John Thomas lives. But Thomas doesn’t plan to run for re-election in 2022. He said he would be happy shifting to District 6 in order for District 1 to include more of the Murrells Inlet area.

“That’s what I’m going to push for,” he said. “The guy that did it from RFA, he must have assumed that he was supposed to keep the incumbents in their district.”

That is a traditional consideration of redistricting, but doesn’t necessarily apply in this case, Thomas said.

The first proposal from Fiscal Affairs connects North Litchfield and Murrells Inlet by running the district into the ocean in front of Huntington Beach State Park. The second provides a land connection through the park, but it also leaves Wachesaw Plantation and areas along Turntable Road in District 6, which extends south through Brookgreen Gardens, Willbrook and Litchfield.

Anderson, who served a term on council when the current districts were drawn, said part of the problem with the two proposals is that they try to include both the incumbent council members and the incumbent school board members in the districts. The school board has seven members who represent single-member districts that are identical to the council districts and two members who are elected county wide.

The council is responsible for drawing the lines. That has always been done without factoring in the school board.

But the memo from Fiscal Affairs to the council that accompanied the draft maps notes  that under state law “Council Districts and School Board Districts must be coterminous with the county council district lines, which was taken into consideration with respect to the current incumbents.”

Anderson said he was told that Fiscal Affairs took that approach because of a bill passed in the legislature this year to amend the statute that governs how the Georgetown County School Board is elected. The death of two board members led the school board to change its policy for filling vacant seats and the state law was changed to conform with that.

“I was never under the impression that we would get some special treatment,” she said. “I know what the legislative intent was here, and that was certainly not envisioned on our end.”

Under the school board policy, if an incumbent board member winds up living outside their district that seat is declared vacant and a special election is held to fill it. That was always the understanding when the school board decided to adopt County Council districts for their own members, Thompson said.

“It’s tough luck on our part if we’re not in the right place,” she said.

Under the Fiscal Affairs proposals, Anderson’s District 2 would stretch from the Kensington neighborhood outside Georgetown across the Waccamaw River to Heritage Plantation, where he lives and across to the oceanfront to include the town of Pawleys Island and portions of Litchfield Beach.

The people on each end of the district “have nothing in common,” Anderson said.

But the  proposed lines ensure that Pat DeLeone, a Kensington resident who represents District 2 on the school board, remains in her district.

While school board policy would force an election if DeLeone is drawn out of District 2, Thomas said it is still unclear whether a special election would be required if he wound up in District 6 with Goggans before the end of his term.

He said the county attorney is looking into the question.

Council members said they are due to meet in twos and threes to try to resolve issues between their districts. A meeting of four or more council members would become a public meeting.

The council gave the first of three required readings to a redistricting plan this week. It was by title only. The text was blank. It plans to have that filled in by Jan. 28 when they are due for a public hearing and a final vote.