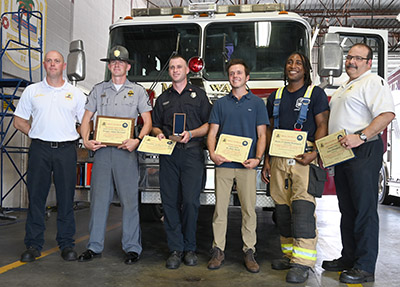 Teamwork saved the life of a Litchfield Country Club man who drove his Dodge Caravan into a pond at the entrance to the community last month.

It wasn’t only the first responders who drew praise at an awards ceremony this week at Midway Fire and Rescue. Blake Marsh, a country club resident, was among those honored.

The 2019 graduate of Winthrop University is headed to nursing school in January.

On the last Sunday in August, he and a college friend, Darien Nguyen, were headed to the Waffle House after surfing earlier in the morning.

A man waved them down at the corner of Country Club Drive and Hawthorn Drive and told them there was a vehicle in the water.

The pair saw Lance Cpl. Adam Marshall of the Highway Patrol enter the water and followed him in.

Marsh’s account helps fill out the picture of the rescue.

The driver, Dana Nielsen, 59, was not able to attend the ceremony, said Fire Marshal Mark Nugent. He was treated and released from Grand Strand Regional Medical Center after the accident.

Marsh said the rear hatch of the minivan was open and he was able to swim inside. Although a seasoned swimmer and surfer, in the excitement, he found he was only able to hold his breath a few seconds.

He and Nguyen helped Marshall try to break the windows on the minivan. The trooper used his baton  and was able to unlock the door and confirm that the driver was still inside.

“I had already gone down three or four times,” Marsh said. “For a split second we all looked at each other and were like: We can’t do anything else.”

Doyle also went under the water several times. He was able to find the driver from the passenger’s side.

Marsh went in on the driver’s side. He felt the driver’s leg and stomach and realized there was a small air pocket at the roof. Marsh got a small breath of air and swam out.

While Doyle pushed from the passenger’s side, the others pulled from the driver’s side.

Although the official report says the driver was unconscious, the firefighters said he was awake and alert.

Marsh thought that the man was struggling with Doyle before he was removed from the car.

The man’s dog was also rescued from the car. Accounts vary about when the dog emerged as the doors and windows were opened.

“This was a fatal collision that was brought back by this small group,” Caulder said.

“We depend on the community, whether it be calling 911 or learning CPR or doing what he did,” Eggiman said, referring to Marsh.

Marsh said he felt proud and blessed to be a part of the rescue. “I don’t have stuff like that happen to me every day,” he said.

He said it gave him a greater appreciation of first responders who don’t always get to celebrate a happy outcome.

“I know that they are more qualified than me,” Marsh said. But the driver “would have died if everyone wasn’t there working together.”

The awards presented this week were: