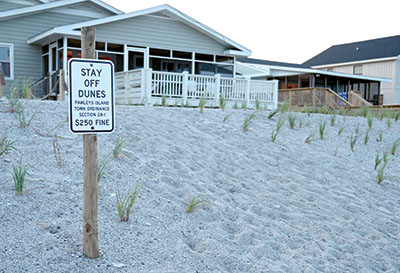 Beach grass grows on the dune at 748 and 746 Springs Ave., where the owners are challenging the town’s effort to acquire easements.

The attorney for the town of Pawleys Island and for the three property owners who are challenging the town’s condemnation of easements for beach renourishment agree that time off is important. They disagree about when to take it.

A circuit court this week agreed to postpone a hearing for summary judgment in the lawsuits brought by the property owners so Town Attorney David DuRant can attend a football weekend at Clemson University.

The town needs the easements to enter into a partnership with the Army Corps of Engineers that will allow the agency to participate in a $14.8 million renourishment project the town completed in the spring. Participation by the Corps, which will involve sand fence and beach grass, will make a portion of the project eligible for federal funds for repairing storm damage and for future renourishment.

The town has easements from 110 beachfront property owners on 1.4 miles of beach at the town’s south end. It needs three more: from Frank Beattie, Barry Stanton and Sunset Lodge LLC.

The three owners, represented by Stanton, filed suit this summer to block the town’s effort to condemn easements. They say the easements are no longer needed because the renourishment project is completed and that the town’s condemnation process is flawed.

Last month, Judge Ben Culbertson denied the town’s motion to dismiss the suits. He also denied a request that the owners each post a $10 million bond to offset the cost of any storm damage caused to the beach while the cases move through the courts.

At the hearing, and in court filings, DuRant argued that the town needs to move quickly because the renourishment project is threatened by an active hurricane season. The town doesn’t have the money to repair any major damage to the beach.

Last week, DuRant asked the court for a continuance for a second hearing scheduled for Oct. 30. He told the court that the original notice he received was that the motions – two by the plaintiffs, one by the town – would be decided based on written arguments.

Then he learned the judge wanted to hear oral arguments.

“Counsel has long-standing plans and substantial investments in the Clemson football games. The sixth home game is scheduled for Oct. 31, 2020, but counsel is committed to get to Clemson two days before that, i.e., on Oct. 29, 2020. The only other home game left is scheduled for the Friday after Thanksgiving,” DuRant wrote.

Stanton replied the same day. He told the court he tried to accommodate DuRant’s plans “short of significantly prejudicing plaintiff’s case and plaintiff’s own plans and pocketbook.”

He proposed different dates and times or a teleconference.

The Clemson football game “is worthy of some consideration,” Stanton added, “but not what the town seeks.”

Town Council last week adopted a resolution confirming that if the town acquires easements on the three lots “the title to the property shall remain with the owner.” It also reaffirmed the easement was limited to “construction, periodic renourishment and maintenance of the Pawleys Island Hurricane and Storm Damage Reduction Project.”

DuRant told the council, following a closed session for legal advice, “There are a couple of things we might want to tweak on that as far as defining public use.”

“It now appears that the town has other procedural measures of some sort in mind, which have not been adduced as a reason” to delay the hearing, Stanton told the court.

He also pointed out that the town had filed a motion to delay discovery in the suits even though they were filed in July.

Stanton said time off is important to him, too.

“Plaintiff also does not want to end up procedurally and financially compromised as a result of inadequate time to complete post-hearing discovery, perform research and prepare for hearing without ruining family Thanksgiving-time vacation and Christmas-time vacation,” he told the court. “Plaintiff specifically does not now want to be rushed into discovery and case preparation throughout the holidays, which holidays are more important to plaintiff than football.”

In approving the delay, Culbertson struck through a line rescheduling the hearing for Dec. 4 and wrote “the next available term of court.”