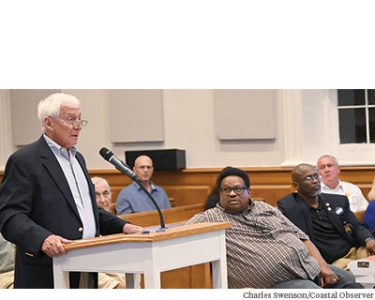 Bob Anderson criticizes the council and its critics.

A former Georgetown County Council member told the current council this week it is “dysfunctional” and argued for a change in the way it fields public comments even as he used the comment period at the council meeting to berate the council’s other critics.

“I want you all to be successful, but you must regroup,” Bob Anderson told the council.

He represented Council District 6 for one term, losing re-election to Steve Goggans in 2014.

Anderson said he has watched events unfold over the last year since the local chapter of the NAACP challenged the residency of District 5 Council Member Austin Beard. He tied that to a chain of events that led to the council’s failure in October to hire a new county administrator.

“For me, this was embarrassing and the last straw,” he said.

Two members of the NAACP, who have been regular speakers at the council meetings, sat impassively while Anderson referred to Beard’s critics, black and white, as “the mob.”

“During the Austin Beard lynching, the mob expanded their targets to include our county administrator and his staff,” Anderson said.

Beard resigned in April after the county election commission found he was not properly registered in his district.

Administrator Sel Hemingway announced in May he would retire at the end of the year. The finance director is also retiring. The county attorney is taking a new job with the Waccamaw Regional Council of Governments.

Anderson said the council did nothing to defend Beard or county staff from “relentless harassment” during public comment periods.

The council reopened its search for an administrator after its first choice declined to take the job. Three of the seven members opposed the candidate, David Garner of Abbeville County.

Anderson said council should eliminate the public comment period at meetings or limit comments to agenda items. “They are not held as a public complaint forum,” he said.

Also, he said constituent complaints to county staff should be referred to council members. That will make them more aware and free up staff to do their jobs.