Fundraising is a team sport for the Warriors – Coastal Observer

Fundraising is a team sport for the Warriors 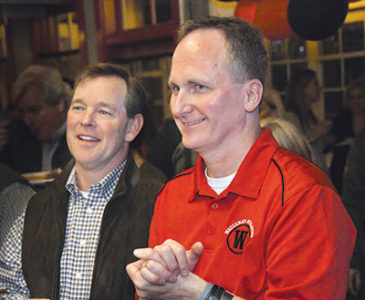 Having five children who played a sport at Waccamaw High School gives Scott Eddy a vested interest in supporting athletics at the school.

Eddy has settled in as president of the WHS Athletic Booster Club since taking over the position from Brian Henry in May. As a member of the club’s board, Eddy was so impressed with Henry’s work he wanted to make sure it continued.

“I felt like I didn’t want to backslide,” Eddy said. “My job at that point was just to keep the train going. Keep it on the tracks and keep it going in the same direction. I didn’t have to recreate the wheel.”

Eddy supervised his first Booster Bash on Saturday night, and watched as more than $30,000 was raised through donations and a live auction. One-third of that money will go to pay for items on the coaches’ wish lists, which were posted at the bash, and the rest will go into the club’s general fund, Eddy said.

“It was fantastic. It fully exceeded our expectations,” Eddy said. “It’s as much about celebrating student-athletes and coaches as it is a fundraiser. We want folks to have a good time so next year they’ll come back.”

Eddy also visited Tidelands Ford on Friday to pick up a check for $7,200, the proceeds from a “Drive 4 UR School” event in December. Ford donated $20 for every test drive, and Eddy said the club will host another event this spring for people to test drive Lincolns.

“Tidelands has been a huge supporter,” he added.

The booster club will use 20 percent of the Tidelands donation to furnish the school’s new weight room.

“Our equipment is so out of date. It’s a travesty the weight room that we have,” Eddy said. “If we’re ever going to compete with a school like Bishop England, our kids have got to get stronger and faster and they’ve got to be better trained. It starts in the weight room.”

The weight room will double in size as part of renovations being funded with the school district’s $165 million bond referendum, but Eddy said it is unclear whether there will be enough money left to buy the new equipment. He expects the price tag to be around $45,000.

“We’re not going to sit back and wait for the district to give us what we need,” Eddy said.

The club saved about $20,000 by refurbishing the old racks, Eddy added.

Furnishing the weight room is the first step in the booster club’s long-range plan, which also includes expanding and upgrading the press box at Warrior Field, installing new scoreboards at every field and improving the field house.

“Let’s quit spending every dollar that we raise,” Eddy said. “How can improve everything going forward?”

The club’s plan is to get estimates on the work, run it by principal Adam George, find out what the school district will kick in, then raise the rest of the money itself.

Eddy knows that the Waccamaw Neck is a small community and there are a lot of teams and other extracurricular activities at the school vying for donations. He called it a “dance” to make sure everybody can raise what they need without asking the same people and businesses to contribute over and over.

“It’s always a big challenge to make sure we don’t step on each other’s toes,” he said. “There are so many people that are willing to give, that just have to be asked.”

The booster bash, which included a live auction, raised over $30,000.

Some of the things the booster club pays for include travel for playoff games, state championship rings, new uniforms for every team every three years on a rotating basis, field maintenance and reconditioning the gym floor every year.

“The common misconception is that the district gives us a lot of money,” Eddy said. “If we had to subsist on what we get from the district we would have very few sports programs.”

Another misconception is that the club decides how much money each sport gets. Eddy said George and co-athletic director Ben Schoen come up with a budget and let the coaches know how much money they’ll get. If coaches want to spend more, they can raise the money themselves, or request more from the booster club.

Waccamaw High has every sport sanctioned by the S.C. High School League. Eddy credits parents who got involved and helped start programs like lacrosse and sailing.

“We’re so blessed to be here where we are,” Eddy said. “We have great support. We’ve got great parents.”

Eddy is an endodontist with a practice in Pawleys Island. He and his wife, Leigh, moved their family to the area in 2007 after he served nine years in the Army.

The Eddys’ youngest child, Mary Russell, is a junior. She played B-team volleyball but is now more involved in student council.

“Having five children, I’ve been blessed to be a part of a lot of different coaches and a lot of different programs,” Eddy said. “When I first got involved, one of the things was I wanted to make sure my kids’ coaches have what they need.”