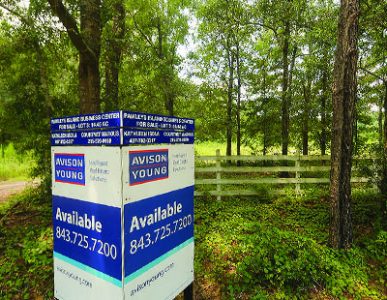 The county started marketing the property in 2018.

The sale of property once planned for a tech park will repay Georgetown County for covering the $950,000 mortgage. What happens to any additional funds has yet to be determined, according to the head of the nonprofit that holds title to the 14.5 acres on Petigru Drive.

County Council voted earlier this month to amend the “planned development” zoning for the property to allow construction of 90 townhouses in place of a mix of warehouse and office space. The 4-1 vote came after area residents urged the council to deny the request from the Alliance for Economic Development for Georgetown County.

Opponents also questioned the structure of the deal.

“We know the land sale is for a big profit,” said Heather Kinder, president of Keep It Green Advocacy, during a public hearing. “Who will get the profit?”

The property was sold to the alliance in 2016. The nonprofit was formed by the county under a different name in the 1970s. Its purpose was “to spend money on things that public money can’t be spent on, such as wining and dining prospects,” said Sel Hemingway, the former county administrator who also served on County Council for 11 years, eight of those as chairman.

In its early days, the alliance was active “when needed,” he said.

In 2016, it replaced the county’s Economic Development Commission as the advisory group for economic issues.

The commission had members appointed by each of the seven County Council members. The alliance bylaws  were changed to require that the council chairman and one other member have seats on its board. Five other council appointees serve, as do six members who represent the water and sewer district, Santee Cooper, Santee Electric, Horry-Georgetown Tech, Waccamaw Regional Council of Government and the Chamber of Commerce. There are up to eight board seats for representatives of business and industry.

“The big change was to address the purpose and give the county some appointments,” Hemingway recalled. “It was to help the economic development director.”

The county bought the tech park property to partner with Mercom, a technology firm that planned to build its headquarters on the site. The deed was put in the name of the alliance, as was a $950,000 mortgage to Santee Cooper that financed the deal.

Mercom ran into financial problems. The project was shelved. But Georgetown County was obligated to pay the mortgage. “It was an arm’s-length agreement where the alliance, the county was going to have to pay for it,” Hemingway said.

Last year, the alliance got a $1.4 million offer from Graycliff Capital Partners for the property.  Graycliff scrapped its plans for 182 apartments after public opposition.

This year, the alliance got another offer. The price and the entity making the offer have not been disclosed.

“We’ve seen the letter of intent,” said Sean Flynn, the chairman of the alliance. “The purchase agreement does have a price in it.”

Flynn, an engineer who heads the regional office of Thomas and Hutton, acknowledged that the price had not dropped since the Graycliff offer.

“If the sale goes through, the first order of business is for everybody to be made whole,” he said. “A decision hasn’t been made” about the balance of the proceeds.

Cindy Person, chief counsel and executive director of Keep It Green Advocacy, argued that Council Chairman Louis Morant and Council Member Raymond Newton should have recused themselves from voting on the zoning change because of their service on the alliance board.

Although neither would benefit personally from the sale, “my understanding is that the benefit would be to the organization they’re associated with,” she said.

The county attorney, Jay Watson, said before the vote that state ethics laws wouldn’t prevent Morant and Newton from voting because any benefit to them would be no different from the benefit all county citizens would receive from the sale.

“His statement, in my opinion, was very accurate,” Flynn said.

Opponents are  still reviewing the council’s action. Keep It Green Advocacy has filed two lawsuits against the county this year over zoning and development approvals.

The zoning change for the former tech park wasn’t the final step of the process. The council conditioned its approval by requiring the developer to rent 30 percent of the units below market rates for 15 years.

“We will begin negotiations with the county attorney and the county administrator about how to hold my client to this condition,” said Dan Stacy, the attorney who represents the buyer.