Gallery opens doors to a world of art – Coastal Observer

Gallery opens doors to a world of art 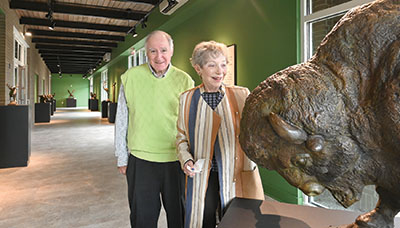 Dick and Brenda Rosen in the galleries that bear their names.

A building that changed the way visitors viewed Brookgreen Gardens when it opened more than a quarter of a century ago has been renovated to change the way Brookgreen views the world.

“Traveling exhibits have become a more and more important part of the way that we connect to the art world and the way that we contribute to art history,” said Page Kiniry, the Brookgreen president and CEO. “We can now have an exhibit from anywhere in the world.”

The Brenda and Dick Rosen Galleries are a $750,000 renovation of the visitors center that opened in 1994. The $3.5 million building was part of a planned $30 million capital improvement plan intended to make Brookgreen a year-round, all-weather attraction.

That’s still the goal, Kiniry said, along with a glass conservatory that was part of the original improvement plan.

But the renovated gallery has fulfilled the same goal as the construction of the visitors center: raising the standards.

When work began on the project, Gurdon Tarbox, Brookgreen’s director for 31 years, told the design team he wanted something that would influence people’s lives.

The center changed the way visitors viewed Brookgreen. There had been two ways into the gardens. With the center, there were four, giving visitors better access to areas of personal interest.

“With some of the work that we have been able to do  – the vestibule, the air handling system, the storage, shipping and receiving – it changes our ability to host traveling exhibits,” Kiniry said. “That allows us to explore themes in art, comparisons of art, which is our mission, our goal in displaying and educating about figurative art in America.”

This year also starts the commemoration of Brookgreen’s 90th year. The gardens were incorporated in 1931 by Archer and Anna Hyatt Huntington and opened to the public the following year.

Dick Rosen has been visiting most of that time.

Like many first-time visitors, Rosen, who grew up in Georgetown, went to the zoo. He has been on the board of trustees for 21 years and will step down this year as chairman.

He agreed that the galleries – there are four in 5,800 square feet – add a new dimension.

“Some sculpture we were not allowed to put in the exhibit halls we had, the Rainey Pavilion. The moisture in there was a real problem, so we couldn’t guarantee to take really good care of some of the pieces,” Rosen said.

The former exhibit space was built in 1968 as a visitors center with one gallery and a gift shop. Its two galleries will be used for lectures and other programs, said Robin Salmon, vice president of art and historical collections and curator of sculpture.

Salmon was “a major motivation” for his support of the renovation, Rosen said. “We’ve known each other forever,” he added.

One gallery holds a historical collection that includes 105 works of Emily Weston, who lived at Hagley Plantation and what is now the Pelican Inn on Pawleys Island.

Those were a gift of Hal Holmes, a Brookgreen trustee. “It’s a wonderful thing for it to be here, for it to be available to the public,” he said.

The two main galleries are home to an exhibit spanning 200 years of nature in art, with many pieces on loan from the collection of Sandy Scott, a sculptor and Brookgreen trustee.

The fourth gallery has a collection of sculpture. “We have things that people walk by, but you don’t really look at it until you get it in a gallery setting,” Kiniry said.