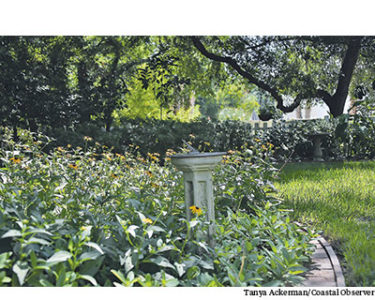 Black-eyes Susans in bloom under the oaks in Cathy Smith’s garden.

To hear Cathy Smith talk, you would think her interest in gardening grew out of nowhere –  just like a bad weed.

“I really have no idea where my interest in gardening came from,” Smith said as she strolled through the yard of her 60-foot-wide lot near the waterfront in Murrells Inlet.

That’s not quite the story. Like a dandelion drifting in the wind, the signs were in the air.

First, the house plants; 80 of them in her tiny Clemson University dorm room. “My roommate and I just kept adding to them, and soon they were everywhere,” she said. “We had to put in a wooden plank to hold them all.”

Second, came that blue rug juniper outside the Myrtle Beach apartment where she and her husband, Donald, lived after they married. Smith didn’t like it, so she replaced it with wildflowers.

“The management didn’t say a word,” she said, a twinkle in her blue eyes.

In 1997 came the house and the yard. After their Lowcountry home was built, they asked a local landscape company to draw up a plan for their yard.

“It was very good, but it was pricey, and we just weren’t in a position to do the entire yard at the time,” Smith said. So she opted to put the green in her yard instead of into someone else’s bank account. “We did the bare bones and only put in foundational plants against the house, and I decided I could do the rest of the yard by myself.”

She never dreamed it would take her 20 years, countless pairs of gardening gloves and numerous sun hats. Or that she would learn how to lay pavers and 1,500 pounds of flagstone all by herself.

But Smith is no ordinary gardener.  Once she got serious, she pursued it with the tenacity of kudzu.

She took a master gardening class through the Clemson University Extension Service and, after  completing the 14-week program at the Horry County Extension office and the requisite 40 hours of community service, earned her certificate. She also studied and read gardening books.

But the proof is in her yard which, with the exception of new Zoysia grass, is a labor of love she has done on her own. Not that her husband doesn’t help.

“He’ll help me if I need something, and he helps me figure size and spacing, but for me, gardening is play,” she said, gesturing to a bed with ageratum, spider lilies, pineapple sage, liriope and a 2 1/2-foot-high cigarette plant with flowers that actually look like a lighted Lucky Strike.  And that’s barely a fraction of her plants and flowers. Smith said she’s lost count.  “I don’t know if I have hundreds or thousands.”

The eye-popping black-eyed Susans standing straight and tall, the four-o’clock blooms that emerge right on time every summer afternoon, the delicate blue, white and pink hydrangeas that beckon a visitor down the flagstone walkway, and the Confederate jasmine that climbs playfully up the lattice on the house.

Clearly, Smith loves all her plants, but among her favorites is her corpse plant, a tall, four-foot plant with a leopard-print stem and a maroon flower that emits an unpleasant odor when it blooms.

“It’s called corpse plant because it smells like rotting meat when it blooms,” she said. “It’s real name is Amorphophallus  titanum. Fortunately, mine doesn’t bloom, and I can also say I have an animal-plant.”

Smith said she buys her flowers locally at various gardening centers and nurseries, with the exception of her Turk’s cap, a pass-along heirloom plant with fiery-red flowers that was given to her. She estimates that about 25 percent of her plants are from seeds, and she loves to use plants such as American beauty berry that reproduce themselves.

Her guiding philosophy: Put the right plant in the right location.

Smith said every moment she spends in her yard is play, not work. After all, how many people could spend six hours digging in the dirt?

“I’ll grab my garden gloves and my straw hat and put on some Jimmy Buffet music, and just get out in the dirt, moving plants, pulling leaves, and anything else that needs to be done,” she said. “I literally pull the leaves out.”

Although Smith has an eye for design and said a creative gene runs in her family, she’s quick to say she’s not a designer.

“I love my plants and flowers, but I certainly don’t want people to think I’m comparing it to Brookgreen,” she said.

Even so, a walk through her garden on a summer morning does summon feelings of serenity, appreciation for its beauty, and awe because Smith did the work singlehandedly.

So what’s next? “Now, it’s just doing the maintenance,” she said. “I’m ready to enjoy it. I have such a feeling of peace and tranquility when I sit on my porch or in my carport and look out over my yard. I can breathe.”

Donald is proud of his wife’s creativity, determination and the resulting beauty. “Cathy has done an outstanding job in beautifying our home’s interior and exterior,” he said. “Our yard is a thing of beauty.”

Then he smiled and said playfully, “It’s almost as pretty as she is.”

Smith is generous with her time and know-how, frequently dispensing advice and tips to friends and even strangers at garden centers and nurseries.

“If I see someone buying a huge bag of fertilizer in March, I just have to stop them and tell them it’s too early to put that out,” she said. “I’m not trying to stop a sale; I’m just trying to be helpful.”

• Have your soil tested by your local extension service. It’s important, and it’s worth the $6.

• Study your yard for four seasons for the amount of shade and sunlight. Determine if you have high shade (trees) low shade (smaller trees or tall shrubs) or no shade.

• Pay attention to the wind direction.

• Plant in odd numbers, such as three, five or seven, and make sure you choose foundational plants that match your house’s architectural style.

• Rome wasn’t built in a day and neither was the Smith garden. Draw up your plans and do one project at a time.