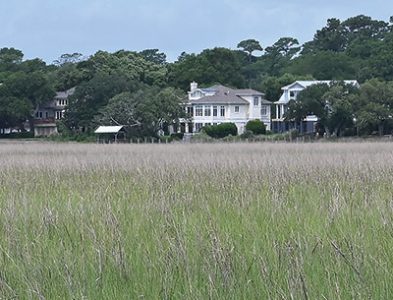 A 50-foot setback from wetlands is among the proposals.

Restrictions on single-use plastics along with limits on pesticides and fertilizers are among the ideas added to Georgetown County’s plan for maintaining and enhancing its natural resources, following comments from citizens groups. It also calls on the county to consider a committee to review large-scale developments to assess their impact on natural resources before they get review by the Planning Commission.

The draft plan recommends a 50-foot buffer between wetlands and adjacent development as part of an ordinance to protect the critical habitat. It recommends extending tree protections to longleaf pines. And it calls for creating more access to the county’s beaches and waterways.

“At least 90 percent of this is fresh, new information,” said Matt Millwood, the senior planner who has been working on the draft.

Natural resources is one of 10 required elements in the comprehensive plan that local governments are mandated by state law to adopt. Georgetown County is updating its plan. The current natural resources element was approved in 2010.

The county is also at work on the land-use element, which dates from 2007. That process started in 2019, but was delayed by the pandemic and then paused after complaints about a lack of public input. A survey of land-use issues conducted by the planning staff last year found that natural resources were considered the county’s most important feature by 96 percent of respondents and that nearly  two-thirds favored stronger regulations to protect those resources.

“That was always in the back of our mind” when updating the natural resources element, said Holly Richardson, the county planning director.

The first draft of the element called for a wetlands protection ordinance. The county currently relies on state and federal regulations and only requires a buffer of 15 feet from saltwater wetlands.

After receiving comments, the draft was revised to propose further restrictions on development in or around wetlands.

The idea of a natural resources committee is one that’s already being used in Beaufort County, Richardson said.

The planning staff will seek additional comments and expects to bring a final draft to the commission for a recommendation in the fall. The element goes to County Council for final approval.

The bulk of the document is an inventory of resources. Millwood said he worked to eliminate information that was irrelevant. At 46 pages, the draft is less than half the length of the existing natural resources element. But its goals are far broader.

Commission member Sandra Bundy suggested the draft needs to include a longer list of the risks posed by ignoring the importance of natural resources.

He already added sea level rise and the increased rainfall that has been recorded as the climate warms.

“We definitely need to start recognizing the risks. I don’t see a lot of that in here,” Bundy said.

Some of those risks, particularly flooding, will be addressed in greater detail in the resiliency element of the comprehensive plan, Millwood said.

Bundy wanted to see more in the natural resources element. “There’s a risk here. People need to understand that,” she said.

Elizabeth Krauss, who chairs the commission, questioned how the county would be able to regulate pesticides and fertilizers.

“What department is going to take that on?” she asked.

“There’s a lot in here that’s going to have to come from our stormwater department,” Millwood said.

That recommendation came from the S.C. Environmental Law Project.

“I bet everybody 10 years from now will outlaw them,” Millwood said. “There are more bans than you think.”

While the goals effect a variety of county policies, almost all touch on land use, Richardson noted.

To protect land being used for forestry and agriculture, the draft recommends zoning changes to allow cluster development that is more dense. That will help prevent urban sprawl.

The draft also calls for more development outside the Waccamaw Neck.

“That’s where the pinch point for the county is going to be moving forward,” Richardson said. “We want to grow, but we also see great value in what we have.”

“That’s where the rubber meets the road,” Richardson said. “This becomes a guiding policy document.”

“I want to make it very enforceable,” Hamby said.