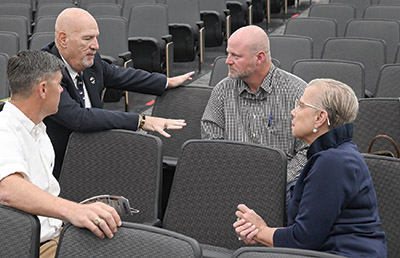 Republicans flipped the leadership of Georgetown city government this week, claiming the mayorship and three seats on council.

Carol Jayroe collected 1,330 votes to defeat Mayor Brendon Barber in his bid for a second term. Barber got 1,064 votes.

Jayroe is the first woman, and first Republican, elected mayor of the state’s third oldest city.

“There’s quite an excitement about a different type of leadership in the city of Georgetown,” Jayroe said. “People are excited, they’re happy, they’re ready for something different. Do we know what everybody wants? No we don’t. But we know that with the overwhelming support of hundreds of volunteers, and the way people got out to vote, they trust us and they know that we’re going to work hard. We’re in it to make the city better and nothing else.”

“I took that chance to become mayor because I felt like mayor was more important and we could have a mayor who was accessible and transparent,” Jayroe said. “People want to know what’s going on. I feel like in the last several years I didn’t even know what was going on with council until 24 hours before a meeting when we would get the agenda. People want to be engaged.”

Council Member Jonathan Angner was the top vote getter with 1,308. Jimmy Morris was second with 1,303 and Jim Clements was third with 1,147.

“I think these four people have the best interests for all of the city,” Karol Anderson, chairman of the county Republican Party, said. “I think they’ve got some great ideas for the city. We’ll work with them and move the city forward.”

Among the Democrats, Ronald McGinnis got 1,134 votes, Dennzon Winley got 1,087 votes and Council Member Tupelo Humes got 1,041.

“Unfortunately, it was difficult to overcome the $90,000 raised by the Republicans, as well as their alliances with the South Carolina Association of Realtors and the W.E.A.L.T.H. [West End Alliance of Leaders Teaching Hope] organization,” Mackey said. “These factors enabled them to flood the city with targeted direct mail pieces. We will continue our work in support of the city and the county, and look forward to better results in 2022 and 2023.”

The Democrats currently have a 5-2 advantage on council. That will flip to 4-3 for Republicans when Jayroe, Angner, Morris and Clements are sworn in. It will be the first time the Republicans will have the majority on council.

“We need this change. We need this excitement,” Jayroe said. “The city needed an invigoration in my opinion. And they got it.”

One person outside the county who is happy with the results is Gov. Henry McMaster, who called both Jayroe and Anderson.

“He congratulated us on doing a really great job and hopefully we keep up the momentum,” Anderson said. “He was just really proud.”

Jayroe, Angner, Morris and Clements campaigned together as “The J Team.”

“We were not encouraged to do so, however we all felt like, between the four of us we each had different skill sets that would work well in the management of the city,” Jayroe said. “We knew if we all got on, we could take our skill sets and work them in the different areas that the council needed.”

“People saw them as being able to work together and having business experience, because the city is a business to run,” Anderson said. “They’ve all had experience with budgets, some of them very large budgets. I think people saw them as having the skills to run the business of the city.”

Jayroe is looking into whether she and the others can be sworn in at the beginning of January instead of toward the end of the month, which is traditional.

“I don’t want to wait three weeks to begin to work,” Jayroe said. “In the meantime we will be strategizing, planning and getting ready to start work.”